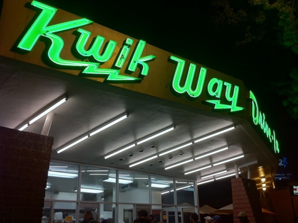 Well it seems the new hot topic is Kwik Way Burgers at 500 Lake Park Ave has reopened. A new owner by the name of Gary Rizzo(owner of the now closed Somerset) has reopened the location with a new restaurant and altered menu but kept the old Kwik Way name.
Just kidding! Here we are in 2014 and they have changed the name to Park Way for some reason.

I’m a little confused as to why the extreme excitement as if this place was actually missed? If I recall many people complained about this place all the time. The same people that complained and protested Walgreen’s but then stopped saying a word when it was paired with a Trader Joe’s. These people even made claims it was attracting a late night rowdy crowd that was not wanted in the Grand Lake neighborhood. A crowd that littered without a thought or care and disrespected the neighborhood. If you check it’s old Yelp it only has 2 stars! They also fought it when a Fat Burger wanted to open up at this location. And fought the McDonald’s option. But let this Burger place right back in? What makes it any different?

So my question is why the hype now? Are you all new to Oakland and just don’t know? Or did you all forget how you felt about it before it closed down? Has anything changed? Maybe the fact that the Heart & Dagger is next door now and not the Serenader? I can see that changing the crowd completely. But the food? Still the same or slightly altered menu. I think it’s mighty bold to try and put yet another Burger Joint upon us with all of the options on Grand including True Burger and Ahn’s Burger so close. Maybe this place will have later hours? But again that was what you opposed before.

As for the food, sub par, over priced and all around not worth it.

Either way, here’s the menu and good luck with it. I would much rather see something else go here.
Leave some comments about the food or experiences you have had here.
Menu: