52 murders in Oakland as of mid June 2022.
The chart below shows the homicide rate month by month compared to last year.
We’re already way above the recent average. It’s not the cops you have to watch out for; it’s your neighbor’s kids. Be safe out there.

Did you know you can listen to the Oakland Police Department live with an app like this Police Scanner App on Amazon.

The total murder count for 2021 ended at 132 deaths for Oakland. A number we have not seen since 2006.
While some other sites may have alternate numbers, they cannot verify or provide their source, so until the FBI releases actual statistics, this is the verified count from OaklandMofo via multiple public sources.

Here we compare the last 3 years side by side with the differences positive and negative. 2022 is still in progress so bookmark and check back often.

The following line graph shows the actual death toll rate by year from 2005 to the present. As you can see, it has been a wild ride of ups and downs for the city of Oakland, CA, and we’re currently on the rise again. 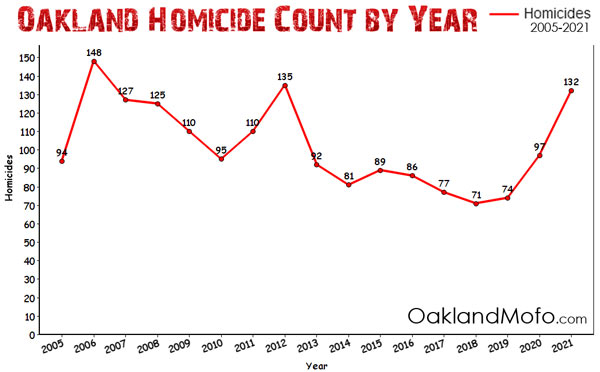 Rate by Year and Month Compared with Averages

If you’ve ever wanted to know the average homicide rate by year and month, we made a chart for you. It turns out the most deadly month of the year on average for Oakland is September.

Oakland should be giving the police EXTRA funding at this rate.
Listen to the local residents of Oakland.

These public figures screaming to take away our police live in upscale gated and walled neighborhoods all the way across the nation, and they hire armed private security with your tax dollars. If they deserve police, so do we. They want our neighborhoods to be chaos, lawless, and lack police and protection. Do not fall for it. They would never live here.

Before they made things worse for our community, yes, homicides did go down for a few years. Mayor Libby Schaaf wants to take credit for this as if she reduced crime, but in reality, she just priced the criminals out of Oakland with huge rent increases. It is not as surprising when you take in factors of the “New Oakland,” such as rent being too high for criminals and people being pushed out of Oakland to further away from cities like Tracy and Stockton. The fact that the murderers have already killed large numbers of each other off makes it understandable that we had a slight decrease in homicides for a few years as Oakland became unaffordable.

With a few of these maps, you can set up Crime Alerts. So far, it seems like the first one, Spot Crime is the best at alerts, followed by Crime Reports. You have to sign up for a free account, but it’s easy. Check if someone has been arrested here.
Get Live Text Updates From OPD
It’s simple; text your zip code to 888777. The service is Nixle. You get alerts whenever something big is going down, protest closures, manhunts, high-speed chases, major bust, etc. And you can easily unsubscribe.

The homicide statistics in Oakland are currently at such a high level, even when the crime decreases, it’s well above the national average as far as homicides and crime statistics. The city attributes most of the violent crimes to gang-related activity. The gang violence is surely adding to the cities record numbers and the police task force has been cracking down on gang violence lately.

They Say Murders Are Declining
However, I have noticed a few bad trends because I pay close attention to the topic. Many people are still being shot, and luckily they are just not being killed. The Oakland murder rates have been so high because of gang wars in Oakland and turf battles, but many of those people are already dead and in jail, so the overall death toll is dropping.
But what about these other shootings? It turns out many innocents are being shot in the legs and arms purposely during recent robberies. So the street criminals that are out robbing people are also shooting them in a manner that will not kill them. And some of these are victims that have already surrendered their possessions and phones.

So as you see, there is a very dangerous, deadly trend on the rise in Oakland. I have only listed a few of the shootings that did not amount to deaths, but there are a lot more. Most alarming is the trend of shooting robbery victims for no reason. The “war on gentrification” has gotten dangerous.

While gang shootings, murders, and neighborhood violence are dropping, carjackings, residential robberies such as burglary, and home invasions are on the rise. So basically, while the people in the streets have killed off most of the targets and murders rates are indeed dropping, crime on newcomers moving to Oakland is still on the rise so be careful.

It turns out Oakland made the robbery capitol of America yet again in 2013. Surprised? Not at all.
Murders are going down, and transplants are being robbed.

Oakland Robbery Rates Rising
Robberies(highest in the nation).
Be careful with your cellphone! Cell phone theft is on the rise, especially in Oakland.
Cell phones are being snatched right out of people’s hands in crowded public places like downtown and on crowded buses.

To add even more funk to the high crime in Oakland, you now have just as many police officer suicides as you do police officers killed in the line of duty over the last 4 years. 4 each.

This documentary about shootings in Oakland takes you down the rabbit hole into deep East Oakland.

In response to a few comments saying we don’t need a youth curfew and that it won’t help with the problem. It would help greatly.
What kid under 18 should be out past 10 pm on any night? Most of the killings and robberies are from people under 18.

Some say we just need after-school programs? How would that benefit 11 pm on a Saturday?

Or more jobs? Easy to say, but where do jobs come from? Thin air?
Why would any smart company move into Oakland? So that their employees can get robbed walking from the office to BART?
And if another company did move in offering 10,000 positions, how many of those would be fillable by some 17-year-old killer with no skill set?
Oh, so now you say we need more schools? More schools won’t make someone learn. It won’t stop them from doing what they are doing. Anyone who wants to learn can and will.
I work in the IT field and did not go to “school” for it. I learned on my own on the internet.
I too am from the Oakland Unified School District and dealt with over crowded classrooms.

Parents are the issue, and morals are the issue; the lack of police to stop these people without parents or morals is the issue.
So you can pretend poor Oakland and its lack of schools and jobs, but the real issue is a bunch of residents of Oakland at this time period don’t value human life, couldn’t work a job if they even wanted one, and wouldn’t attend after-school programs if they were available.

I love my city, born and raised here and seen it through many tough times. This is not about negativity. My entire site is promoting Oakland. Take a look around.
Be proud of your city and neighbors. Don’t be part of the problem.

Please Donate
You can donate for all of my hard work and keeping this up to date daily for you if you’d like. Visit the bottom of this awesome Oakland map collection to see how. You also get a cool gift in return! Those maps are so neat you have to visit the page anyways.