Why is the Oakland Police Helicopter flying now?

If you’re wondering why there are helicopters over Oakland right now, here are several ways to find out.

1) Sign up to get text updates from the Oakland Police Department. I have instructions on the murder rate article.
2) Oakland Police Scanner app. Search for it on your phone you should find a free version.
3) Make sure it’s not just a car accident on 880 or 580 with Sigalert.
4) You can try the Twitter feed. A surprisingly good source.
5) View its live flightpath right now.
Yeah, I know. Cool, right? You can even check what news helicopter is flying now. 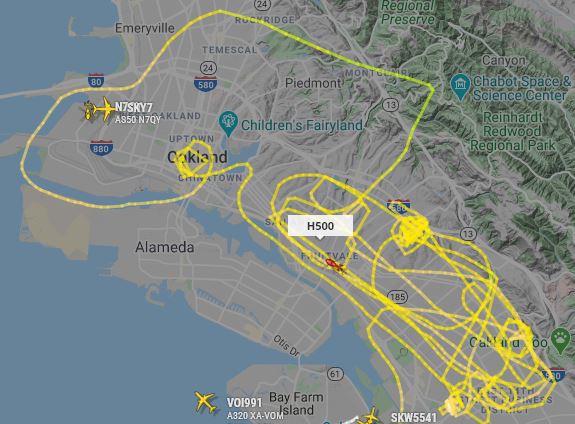 Note that most of you moved here during the stretch where the Oakland Police Helicopter was grounded due to funding. Now that it’s back you think if it’s flying it must be riots or protests. However, the fact is ARGUS was a major tool for OPD and used to fly every day most of the day. There is a lot of crime in our city and now that the funding is being restored you should just get used to the police helicopter as part of your normal everyday background sounds of the Oakland soundtrack along with the ambulances and police cars.
Welcome back ARGUS! TOWN BUSINESS!

You may wonder where the Oakland Police Helicopters have been hiding these last few years. Our Ghetto Birds(yes we have two) have been grounded for the last many years. In 2009 budget cuts forced the choppers to stay on the ground… outside of a hanger. Where they have been battling weather damage since they were moved from Hangar 1 to the South Field outdoors. I’m not sure of their exact homes at this time but I believe they are still sitting outside where they can sometimes be seen from Hegenberger.

While ARGUS has been grounded for several years, it has still flown in a few emergency situations such as the death of four Oakland Police Officers in March of 2009, the Oscar Grant riots, and the Occupy Oakland protest. The police helicopter was even here over my house last month after someone was robbed, shot, and killed out front. The helicopter was here in seconds, so it had to have already been flying on another mission. It was here before the police, firefighters, or ambulance so I would say it is a valuable asset to Oakland’s Police Department and fighting crime. I also kind of miss the sound of the ghetto bird circling around at night. It’s something I grew up with. I remember when we were kids whenever it was over our hood we would purposely scatter and pretend to be running or hiding. It worked we got spotlighted one night and were all so happy but scared at the same time.
I do still hear it on rare occasions smashing through the skies of Oakland at top speed, so it is comforting to know that maybe that one will not get away.

Bring The Oakland Police Helicopter Back

The chopper used to fly about 1,200 hours a year but has been grounded for years and can only fly in emergencies. Since then robberies and other crimes have skyrocketed in Oakland. Like out of control.

One simple solution to budget cuts would be to hop on board the drone train. Congress is forcing the FAA to open up US skies to drones for use by Government Agencies. I feel this could really help keep our budget under wrap and the streets safer. However there are many possible problems as discussed in this article.
But really drones are surveillance helicopters just like ARGUS is. So the only difference is it’s thousands of times cheaper to operate, and we could have more covering more crimes as they happen. I really hope for this to clean up Oakland.

Update, Shot Spotter Cancellation Could Fund Helicopter
I’m starting to think Jean Quan is reading my site. She finally says they need to get the police chopper back over The Town. But at what cost? She says they are going to scrape the ineffective(debatable) Shot Spotter Gun Fire Detection System and put that money towards getting the Oakland Police Helicopter off the ground and flying again. While obviously, we need the helicopter up, can we afford to lose the shot spotter system? It reportedly costs $264,000 a year, and the cost of operating ARGUS is over $600,000 a year, so it’s a start.
But without it, gunfire would go widely unreported in Oakland because the residents(myself included) simply do not call every time you hear someone busting caps.
If you look at the data, Shot Spotter reports many more than residents report. And the officers get the report immediately, and they may be in the area instead of receiving a garbled radio call 5 minutes later. And even when neighbors do call the police, they are most likely calling in on cell phones so they must first get routed through the California Highway Patrol Dispatchers and then to Oakland Police Dispatchers. Those several minutes make a huge difference. That system has to be fixed. Good thing Shot Spotter works.

Another Update:
The police helicopter has indeed been flying this year, 2014. I have seen and heard it on several occasions.
However, a lot of people are mixing up the other area helicopters for the Police Helicopter.

Is it really the Oakland Police Helicopter?
With all these new people in Oakland, I hear way to often reference to any helicopter in the sky as the ghetto bird.
People usually mistake News Choppers for the Oakland Police Helicopter. An easy surefire way to tell the difference is the Police Helicopter will always circle around its targeted area like a Hawk or other bird of prey and at night have a spotlight on it.
News Helicopters will hover off in the distance usually at a much higher altitude. So I call these Humming Birds because that’s basically what they do. Hover and annoy you.

Photos:
We used to have two helicopters from what I know, and I have even found two pictures with two separate “N numbers”(A unique identifier issued by the FAA like a car license plate), so it seems we did or still have two. However, I can not find any information stating that we still have two after the groundings and budget cuts. Please if you have any insight or something to share contact me.
But as of 2009 two choppers were grounded. So they may both be sitting there.

This is what seems to be the current chopper with the N number N510PD. How funny right? Is it an 0 or an O? It works either way!

And then maybe still a second chopper with N number N220PD.