An updated comprehensive list of all the best and worst Oakland farmers market. Friday, Saturday and Sunday. Including dates, hours, months, vendors, entertainment, and food items you may expect to find.

The best Oakland fresh food and produce Farmers Markets. Many of these markets include live music and arts and crafts. This list is current for 2020 and updated when new information arises.

While all these amazing markets are available in your neighborhoods, don’t forget with new technology, it is very easy to grow organic produce inside your home and even in your own kitchen with one of these.

An obvious favorite of many, your best option for a Friday Market.
The Old Oakland Market has been running for over 20 years and it is the first big market of the weekend. This particular farmer market is great because you can go there on your lunch break(if you’re lucky enough to work in or around downtown Oakland), get great food, listen to live music, eat in the sun and stock up for your kitchen. There is generally some form of live music, an amazing tamale stand, and some supreme hot links. I was in fact lucky enough to work nearby at the Port of Oakland and looked forward to this every week.
[insert]
Here are just a few of their certified organic vendors you can find there on any given week.
Avila Farms, Capay Organics, Chinchiolo Farms, Far West Fungi, Far West Cider, Feral Heart, Halls Organics, Triple J Olives, Twin Girls Orchard, and much more!

The Grand Lake Farmer’s Market is a hidden oasis under the 580 and it’s bustling with livelihood. With almost 100 vendors, live music, prepared food, art, and clothes vendors it is often rated the best Farmer’s Market in Oakland and the East Bay. You can not possibly walk by without being sucked in by the smell of kettle corn.

An interesting note, they are a Marin based company. For local organic shoppers, it is a tough choice between Marin based Grand Lake Market and the Oakland Based Old Oakland and Jack London Market. I stand by local Oakland, long-running, community involved and supported. Marin has done enough for Oakland’s rent increases already.

I would say the best, a very fine Sunday market with a variety of fresh local organic fruit, freshly baked bread, vegetables, nuts, flowers, artisan boths, and more. The Jack London Market also has added features such as a performance stage with new local acts playing weekly and a free outdoor Yoga class and other events every week.

I would say this is the best weekend Farmers Market. It is very locally driven since 1989, has live entertainment, the best possible location, on the waterfront in beautiful JLS, has a wide variety of local organic vendors, and a local community-driven backing. Their website also contains the most information about vendors who sell at this market. This alone is huge. You often have to wonder who you are buying from at other markets while the Jack London one has Seller Profiles with lots of juicy information. I suggest you support these guys over the Grand Lake Marin based guys if you are looking for a great Farmers Market experience and a solid local company to invest your dollars in. The choice should be obvious.

Even better! They do not allow dogs! So you don’t have to worry about a bunch of Yupsters parading their dogs around all up in your food mix. California Health & Safety Code 114259.5 states live animals are not allowed in certified organic markets. With the exception of actual service animals.
Below is a photo Iook but it was a few years ago. 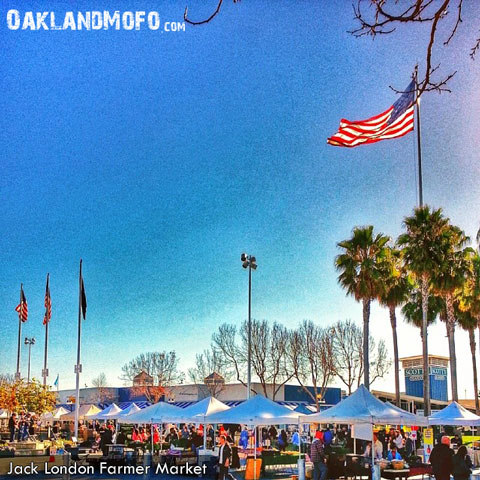 Hidden away in the parking lot of the Claremont California Department of Motor Vehicles you will find this little hot spot Farmers Market. In the Temescal District and sponsored by the Temescal Telegraph Business Improvement District. While on the smaller side and nowhere near as fun as the Jack London Market, still a nice rotation of organic food options. Here are some of the vendors that you may find there at any given time. However, they do rotate between other markets and some are seasonal.
Blossom Bluff, Capay Mills, Fenella’s Berries, Good Faith Farms, Gattonelli Farms, Happy Boy Farms, Inzana Farms, Kashiwase Farms, Kassenhoff Nursery, Living Apothecary, Lucero Farms, Mama Tong Soups, Massa Organics, Northridge, Oasis Dates, Pinnacle Farms, Smit Ranch, Sunrise Family Farms, Stepladder Ranch, Tomatero Farms, Tofu-Yu, Bee Healthy Honey

Montclair has one thing going for it. If you live in the Oakland Hills, it is closest to you. I would go here over Temescal but still, head to Jack London if I was able to. Put on locally by the Montclair Village Association, it is a good thing for the local residents but not worth the drive for those of you in the flats.

OK, we’re only listing these ones because we are offering a full list of Oakland Farmer Markets. These are smaller, less traveled, fewer options, not open year-round, and all-around a waste of time if you go to a real one like the Jack London Square or Old Oakland market once a week. However, if you are already in the neighborhood of one of these are live nearby, it can be a place to stop. And I’m not kidding, some of these offer straight-up common store-bought items as specialties.

We’re only mentioning this one because they list themselves as a farmers market. I’ve gone and seen 2 vendors, nuts and oranges. You can check out reviews online and see many other reporting the same thing. It may get better as this neighborhood is at the forefront of the next big gentrification boom, being next to Fruitvale BART and all.

This is not your one-stop market. It is small, a handful of vendors, worth it only if you work here or happen to be walking the lake. The company itself has a broken website but they do push their small incomplete markets in many cities.

This new one is a little weird because instead of just being a Farmers Market like all the others, they make it clear to state they are a “certified black farmers market” on most of their promotions and media. They have even gone as far as to say “Oakland as we engage a community vibe of self-reliance”. Which I guess that is good but hey, open up, be inclusive and drop the race-baiting game. It’s 2020. Oakland has a lot of markets that any producer can join no matter what ethnicity or background so something like this seems inclusive and counterproductive, but whatever. There you have it, blacks only farmers market. I was unsure of putting this on the list because it promotes division and barriers, but maybe they’ll stop this race stuff and just be an Oakland Farmers Market and join the open community.

Update as of 2020 the Oakland website has closed down and a new one popped up with the same name in Los Angeles. They accept “browns” now. This statement was added to their website. “Freedom Farmers’ Market is an exclusively Black and Brown farmers market”. Surely it is the same clowns who failed after trying their division tactics for profit in Oakland. Now they attempt to profit in LA.

Over the course of a few years, they have had at least 4 locations and are having a hard time getting a solid footing. One of the first locations, if not the first, was right next to the existing Temescal Market. They straight up set up shop next door and said look at us, we’re for blacks only. No wonder they can’t hold a location down. These vendors could have easily joined the existing market but felt the need to divide. Then again, it could just be the owners seeing a profitable market in using racial tactics and hoping to gain business from those who refuse to buy from anyone other than African Americans. It’s all so hard to imagine, but they are doing it.

Latest Update: I think they finally failed with their self imposed barriers. They surely changed locations yet again but I can’t find any hours or dates for the 2020 season. According to their Facebook, they are spamming a film viewing over and over trying to make a quick buck on a film about Black Farming in various cities. Either way, Oakland does not need this attitude. Either join the community or move on. We already have great markets that are open to all.

East Oakland Farmers Market closed for good. Anyone in Oakland knows nothing good last long in the Deep East. It’ll be a while before that place sees Gentrification. Especially since the city let the Raiders go and it was their only hope for revitalizing that part of the city.

North Oakland Children’s Hospital Market appears to have vanished from any sort of timetable. This one may have been put on by Phat Beets. They have a link below if you would like to contact them. But all listings revolving around the North Oakland Market are not current.

Because individual Farmer Markets may change their hours at any time it is advised you check with them before planning around it.