In this article, you’ll learn a lot about what Oakland used to look like and what it looks like now. You’ll learn things like the fact that Oakland was only a tiny village neighboring another small town by the name of Brooklyn, and that Alameda was mostly marsh, or more shockingly, Lake Merritt is not even a lake, and more. 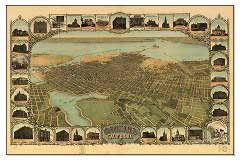 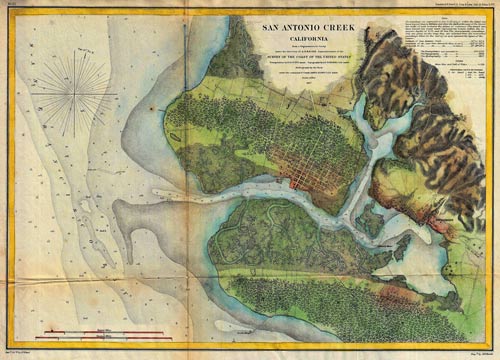 This Historic Map is so colorful and telling. It shows even the smaller hills surrounding Lake Merritt. The topography overlay is realistic, yet the map is of such a small area it looks surreal.

A lot of what we know now as Oakland and Alameda have changed drastically over the last century and a half. If you go way back in time, to Oakland during the mid 1800’s– 1857 to be exact– you’ll notice a few obvious differences, such as the true shape of Lake Merritt and the fact that Alameda was not even an island yet, but instead more or less wet marshlands. Yes, there is a lot of landfill around the Alameda / Oakland estuary neighborhoods right now. You’ll also notice East Oakland is labeled Brooklyn in most maps from this time in history. 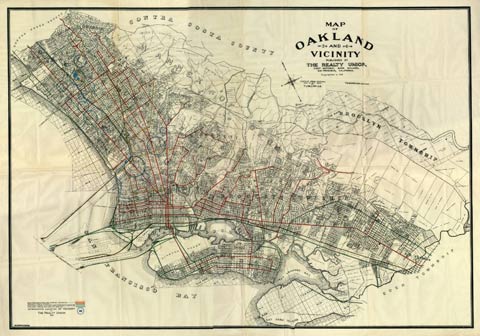 A Map of the “Oakland Vicinity” from 1912. Published by the Reality Union. At this point, Lake Merritt was more sealed off and a canal was dug out making Alameda the “island” that it is today. You’ll also notice there is no Coast Guard Island yet because that is also a landfill. And where the Alameda Naval Air Station was is also still marshlands that have not yet been turned into a Naval base. Meaning more landfill on the estuary. These are not the best places to be in the case of an earthquake as you can see from this liquefaction map of Oakland. 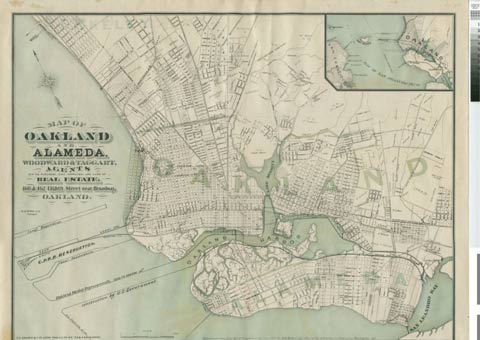 In this map, what was once San Antonio Creek, is now “Oakland Harbor” but the canal has yet to be opened up to the San Leandro Bay. I’m not sure of the year, but it must be early 1900’s. It has to be prior to the 1912 map because Lake Merritt is still fully opened up like a tidal lagoon. 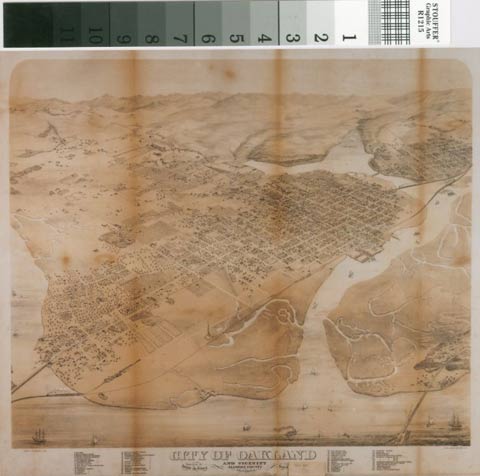 I don’t have much info on this historic West Oakland map but it is a cool birdseye view aerial angle looking over West and Downtown Oakland. 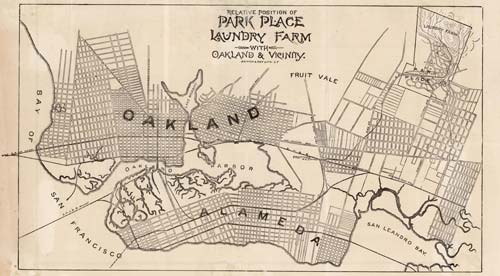 This map, titled “Park Place Laundry Farm” shows Oakland in sometime pre-1900 when Alameda was still an extension of Oakland with the Oakland Harbor. 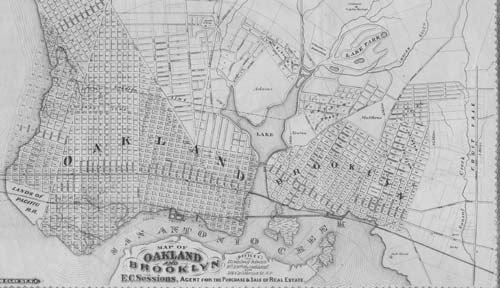 This map from 1869, once again shows historic Oakland as neighboring a city by the name of Brooklyn. Alameda is not yet an island and the Encinal train track runs all the way through Alameda. Also if you click and view the full version, you’ll notice Yerba Buena Island is titled Goat Island. One cool thing about this map is the fact that you can pretty much see all of the old Oakland street names in this highly detailed large image. Be sure to click it. 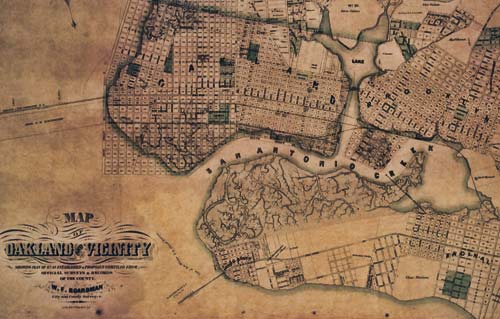 Here is a historic map from the late 1800’s also showing Brooklyn being just as big if not bigger than Oakland. In this map you also see it is still San Antonio Creek and there is no ship canal between Alameda and Oakland yet. Lake Merritt is still the open tidal lagoon and West Alameda is not a landfill yet. 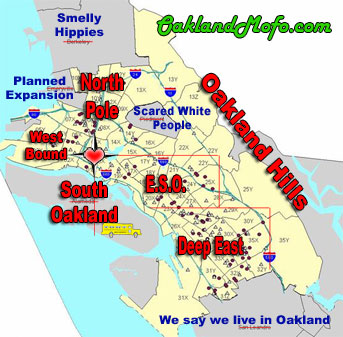 This map was a joke I did a while back. Maybe like 2005 even. Some people were arguing about where East and West Oakland were so I made this map. As if it’s really debatable? They were clearly on the front edge of the transplant invasion.

You already know where to go for high resolution maps of Oakland now.

I have put together an extra special high-resolution map pack download for those who would like to help support OaklandMofo and keep it running by donating $5 or more via PayPal. Our server cost is pretty big yearly and a lot of time is invested in bringing you articles such as this one. I do it for fun and to share Oakland with you so if you can donate, please do.

As a thank you for your donation towards keeping this site alive, I will email you the massive map pack shown in the video below. Please allow up to 24 hours for me to get the email and reply with your link and password for the download. It will be setup like in the video, point and click the map you want to view and zoom in.

Watch the video below for an example of the map pack and how it works.

Music by Polish Ambassador. I love this song. 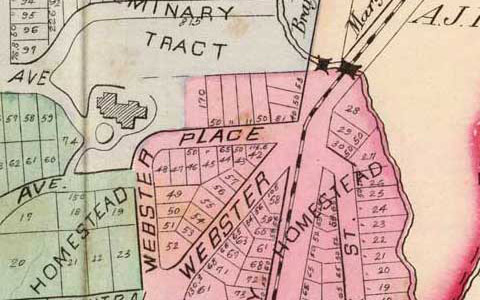 (Actual size when zoomed)
That is Broadway heading up and the Webster there is actually Piedmont Ave now. You’ll find all kinds of interesting changes. If I’m correct that is Merritt Hospital on the hill, where I was born. As you can see, you get all of the details of an old historic Oakland city. It’s really very interesting and you will find yourself spending hours exploring the city you love so much, learning a lot of history and seeing very familiar names and streets.