No matter the cause, you can’t go a few years without “rioters” in Oakland. This time around it is a lot quieter than in the past but why?
Photo by Yagii 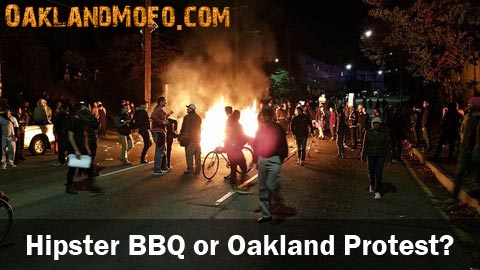 Because during Occupy Oakland there was a huge focus on us from around the nation, but now that it’s Ferguson’s turn, all of the actual provocateur agents and Black Bloc Anarchist have flown out of Oakland to Ferguson, the epicenter of it all to start some shit. And as expected, the city is on fire. Oakland got lucky on this one.

What do you mean provocateur agents?
During the Occupy protest / riots there was a very large number of people out peacefully protesting. But who was burning stuff and smashing windows? A very small group of white kids with shinny new black boots, military grade gas masks and brand new black backpacks. They called themselves the Black Bloc Anarchist. But who is funding these kids? Surely by their getups they seemed like they all came across a bit of money at the same time. At least enough to appear to be a group of rich white kids with new toys.
Whoever gave them money and whatever city the truly originated from is unknown. What is known is they were the ones starting fires, yelling craziness, breaking windows and getting others to join them.
While not all of them are inside plants, it only takes a few leaders to sway a group.

Because these guys all flew to Ferguson instead of Oakland this time, Ferguson is on fire and Oakland is having a few small hipster BBQ’s. 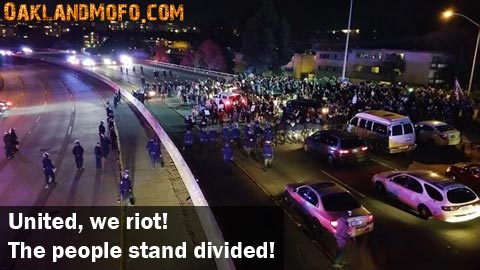 Protestors Shut Down Freeway
Oakland protestors have never really been good rioters without the help of Black Bloc Anarchist. They do sometimes gain numbers but then they waste their time doing things like shutting down the freeway for about 10 minutes at a time or marching far away from anyone to the abandoned Port of Oakland at night. While this is effective in getting them on the news, it never ever does anything for their cause. Whatever they’re trying to do anyways.
You simply can’t gain support by blocking innocent bystanders from getting home after a long days work.

Protestors Halt BART Trains
A small group of knuckleheads decided to chain themselves to BART trains the day after Thanksgiving in some sort of protest. What does this do for anyone? It stops people from getting to work in San Francisco. Luckily they were all arrested and will now have criminal records depicting their poor decision making choices in life.

Protestors forget why they are protesting?
For some reason it went from a Brown thing to something about Black Friday and they decided to Protest Walmart and Best Buy instead. Do they even remember why they are out there? In San Francisco things got out of hand at Union Square when a small handful of protestors showed up and started smashing windows amongst the masses of holiday shoppers.
I know they think they are doing something positive, but the truth is these people are going to buy gifts for their friends and family no matter what and because the economy is in such disrepair, they do it on Black Friday when they can save a few hundred dollars in the process. Who on earth wouldn’t want to save money?
If anything the protestors are helping these places by scaring shoppers away on Black Friday because the shoppers are going to come no matter what. Now it’ll just be another day and they won’t get the sale price which in return makes more money for the corporations being protested and takes more money from the poor families of America.
Good job you wanna be rioters. Jobless has been wish you weres.

Very Quiet Riots
Because the mass majority of mysterious white kids in black masks were out of town and in Ferguson, Oakland escaped with a few small bonfires in the streets, a few broken windows, typical stuff like the Starbucks on 8th and Broadway, Smart & Final, Oakland Tribune paper, Arco Gas Station, Bike Repair Shop and a few others but overall pretty much a very quiet protest and hardly a riot.

Sideshow Busted
Someone unknowingly planned a sideshow on the same day as the Ferguson protest Wednesday and they all ended up getting busted. They were at the Port of Oakland, only moments away from hundreds of CHP Officers on duty to keep protestors off of the Bay Bridge. And because the protestors did not go towards the bridge, that left the hundreds of CHP Officers free to come carry out the largest ever sideshow bust.
CHP trapped hundreds of cars on Maritime by simply blocking the only 2 ways in and out. It has always amazed me that they carry out such large sideshows in this area because it is so easy to block everyone in.
Well finally they did it.

Can you beleive they actually advertise the sideshow on Instagram these days? Just look up hashtag #sideshowoakland or maybe it’s #oaklandsideshow 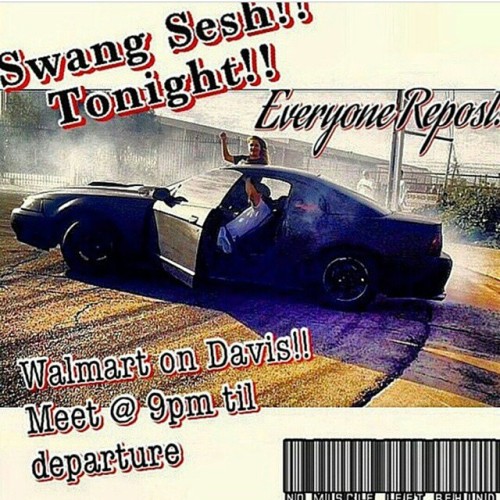 Why are people protesting?
Is it because Wilson did not get taken to and actual trial? Because the Grand Jury saw the evidence, forensics, eye witness reports and knew he was innocent? Most will say yes, however if he did have a trial he would have been found innocent based on all of the evidence and that’s why there was not a trial to begin with.
So what if they had a big media parade trial just to satisfy some people? He would still be innocent and people would still riot.

As far as I’m concerned this is the only credible eye witness in the whole case and his story matches Wilson’s and a few other eye witnesses(the only real people who saw it) to the T.
So this story, unknowingly recorded live on the scene as it’s unfolding holds true to the others.
But who are these people saying he hand his hands up? There are several versions of that story and none of them match, making it fabricated. Some say his hands were fully up, some say he was on his knees, some say his hands were halfway up, some say he was talking, some say he had his back turned, he was begging, etc etc. None of those accounts match each other and all of those people should be put to a lie detector test and locked up for obstruction of justice. Why hasn’t this happened? Is it because some of the made up stories were actually planted by the government to create even more civil unrest? Distract and divide.
So there you have it, live, accidentally recorded eye witness account matches the other truthful and Wilson’s account. What more do you need?

Ferguson Trial?
I’m torn on if he should have an actual trial or not. Lawfully, no he was doing his job and defending his own life and that was found to be true on all accounts by the Grand Jury.
Peace Officers have the right to defend themselves against raging criminals.
Should Wilson have a trial to satisfy the angry mobs? Maybe he needs a trial? But should we bend the law for those who refuse to see the facts and are mislead by incorrect information online? Unfortunately that is not how it works and you can stomp around and smash out windows and burn down your local community center all you want, it won’t change the judicial system.

Black Lives Matter
Of course, all lives matter. Who wouldn’t agree with that? Sure there are a few people out there but you’re not resolving that like this. That is not the problem here and all of you people making a scenario about two human beings into something about race have issues. This was about law vs criminal. Not white vs black. Stop instigating racism. YOU are part of the problem.
If black lives really matter, solve the damn problems. Don’t get upset once every 4 years when a cop shoots a black guy that happened to be partaking in criminal activity and became a threat to the cops life. Get upset when thousands upon thousands of black criminals are shooting other black men constantly. But you know, only if black lives matter.

Mike Brown Unarmed?
While Brown himself did not show up to the confrontation with a gun, Wilson, being a police officer, did have a gun.
Brown attacked Wilson inside his patrol car and Brown did attempt to get the gun from Wilson in a struggle, resulting in him being shot in the hand at close range. Even the made up stories agree with this because it is undisputed because of forensic evidence.

So people can say he was “unarmed”, but he was charging back towards Wilson(according to Wilson, several others perfectly matched stories and one unknowingly recorded story) and would have surely gone for his gun again. There is nothing else he could be doing in a situation like that.
So we can say he was unarmed and I’ll agree, Brown didn’t bring the gun, but he clearly got the gun involved and left Wilson in a panicked fear for his life situation where someone was going to have to use it. Better the man doing his job and protecting himself against a wild raging criminal than the criminal himself.

What am I saying? unarmed my ass, he was way bigger than Wilson and was going for the mans gun himself. You don’t have to have a gun in your hands in ordered to be considered a threat to someones life or to be considered a deadly weapon. Brown was a deadly weapon.
I, you and anyone trying to live would have had to shoot him too. Especially if you have a wife and kids at home expecting you to return home from work.
It’s funny how you all stand by and say things like “I would have defused the situation or used hand to hand combat training blah blah blah”. Stop kidding yourself. Brown would have destroyed you and your only option is to drop him. I do think that Wilson should have tried a little harder to aim for his legs, arms, whatever but that is not really how cops are trained and in a panicked limited time state of mind, you’re shooting to live, meaning the other person will die.

Is my opinion unpopular?
Sure, but many people are falling into this distract and divide warfare brought upon us by the media. They want you to think unclearly and in a mob group thought mentality. You actually think you’re doing good when in fact you are doing harm. You must use logical thought and facts. Not personal opinions and swayed news stories. Look at the real issue and try to solve that problem. Don’t pick a single case that has a clear fuzziness and alienate yourselves further.
Distract and divide.