Did the Oakland Cranes give birth to the AT-AT Walker?
You have probably heard the ongoing urban legend that George Lucas got his idea for the Star Wars AT-AT Walkers from the Port of Oakland shipping container cranes while flying into Oakland International Airport. Can it be confirmed? Who knows the truth. I think it’s highly possible because he does live here in the North Bay at Skywalker Ranch in Marin, CA.

However, George Lucas himself says he did not get his creative idea from the cranes located at the Port. Is this true? Would he give the shipping container cranes credit for his Walkers? Or would he say it is obviously a unique idea created purely by his own imagination? Some even say he actually got the idea from garbage trucks and they do look more like massive garbage trucks.

Oakland is now home to 22 of these Super Post-Panamax container cranes. These behemoths are some of the biggest in the world. So huge in fact that when they shipped them from China they only had 9 feet of clearance from the top of the cranes and the San Francisco Bay Bridge.
[insert]
Each huge structure stands 253 feet tall which is about a 25 story building. The boom when fully extended is 210 feet and can span across a 24 container wide ship. The huge cranes are able to lift a massive 145,000 lbs each and can unload about 35 shipping containers per hour.
But that all comes at a price. Each crane is an estimated $5.5 million dollars. After transporting them from China to Oakland, they come out to an estimated $7 million dollars each.
This is all in time for the Port of Oakland’s Maritime expansion project which dredged the shipping canal to -50 feet to cater to Post-Panamax cargo ships of the maritime industry.

MSC Fabiloa – Largest Container Ship to ever port in North America
The expansions and Port of Oakland upgrades have paid off. On March 21st 2012, the MSC Fabiola Ultra-Large Class Container Ship docked at the Port of Oakland. The MSC Fabiola is the largest container ship to ever dock in North America. The container ship can hold up to 6,000(average-sized) containers and is nearly a quarter-mile long at 12,00 feet. The ship is 55 stories long and can travel up to 25 knots. 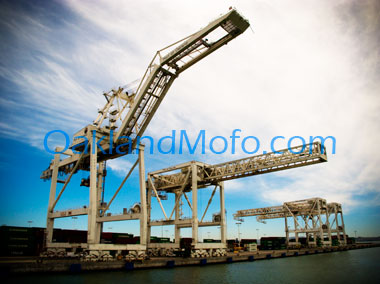 After the Port of Oakland, the MSC Fabiola will set sail for China and the voyage should take about 18 days. This class ship usually stays in the Asia Europe trade routes and this is the first time one has made it to the US.

Oakland still has to get rid of its old low profile smaller cranes to make room for the new massive cranes. So they are recycling them. Putting them on a barge and shipping them to the Port of Boston. Pretty funny considering the huge baseball rivalry between the Oakland A’s and the Boston Red Sox.

Based on that animation, you probably can’t even begin to wonder what it might seem like crossing a great ocean full of ships passing in the night.
Well, you’re in luck because here is an amazing 30-day time-lapse of a cargo shipping mobbing around the world.
[youtube]