There are a few easy yet fun Oakland bike rides I myself like to go on so I thought I would share with you.
These are the short sweet simple easy rides with pleasurable outcomes that do not require any kind of special bike or training however it is suggested that you wear your helmet because Oakland drivers have been known to crash and run in stolen cars. It’s too frequent of a thing.

Bike Ride Lake Merritt
Riding around the lake can be quite rewarding and more of a leisurely roll than a bike ride. With the lakes new rehabilitation you might not even make it all the way around before you stop and enjoy a view or make new friends with some lake side BBQ party people.
In order to get the bike lane that rides alongside the lake you must go down Lakeshore, up Lakeside, south on Grand. Here’s a map.The lake its self has a bike path almost the whole way around with the dangerous exception of the west side along Lakeside where you end up on a blind corner riding with traffic and no bike lane. Actually overall the entire path around the lake is dangerous do to poor planning on the city’s behalf. I really hope the city makes this safer because it is a commute option for many. 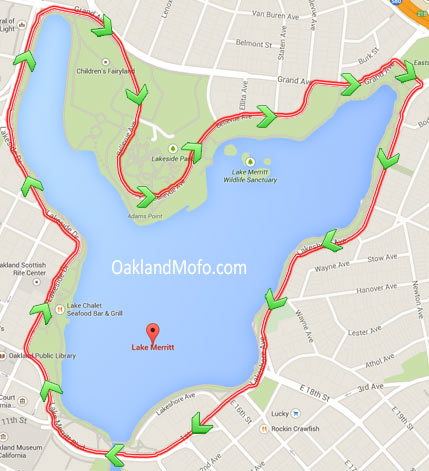 Bike Ride To The Port Of Oakland
This is a great easy ride and it is best if planned around sunset or early morning for the best clear sky view and photo opportunities.
This is a supreme ride because it’s pretty much all flat with wide traffic less(in the evening) roads and at the end of the ride you can hang out at Harbor View Park which I highly recommend for sunset. It doesn’t take a lot of effort to get to from downtown.
You can even get there one of many ways but for this case, I suggest you go down Broadway towards Jack London Square and take 3rd to Adeline / Middle Harbor as shown on the map below.
You have the option of continuing on to the Bay Bridge or take that ride on another day.

Ride To The Graveyard
This could be the best ride of all because it requires little elevation change and puts you at the top of the Mountainview Cemetery at the end of Piedmont Ave in Oakland.
If you haven’t been here I suggest you get on your bike and do this now. If you’re too lazy then drive. Just do it.
There are many ways to get to the cemetery but for the sake of a nice pretty easy ride, I suggest you start from the top of Lake Merritt and head up Grand Ave all the way until it turns into Pleasant Valley Rd. and take it down to Piedmont Ave. Once in the graveyard you will have to kind of find the route to the top yourself. It’s not that hard but just head all the way back straight, up and to the left. The road will wrap around the back of the mountain before coming back out to the front. You can do it.
Fine, I highlighted it for you. 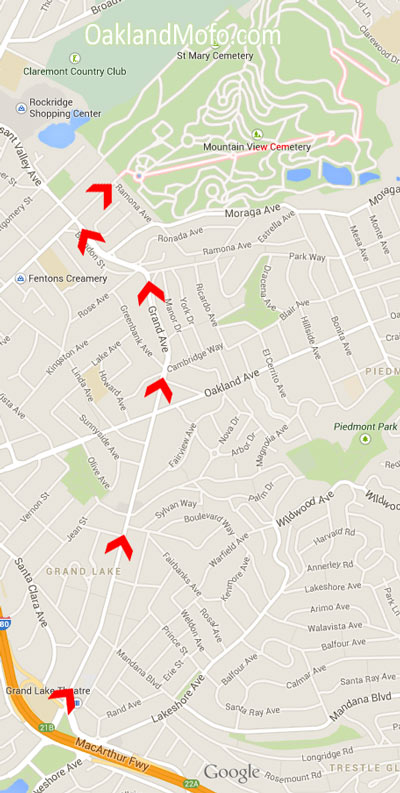 Ride To Berkeley
This one takes a little more effort because ridding to Berkeley is actually a slight uphill the entire way but it’s barely noticeable and coming back is a long effortless breeze.
You have a few ways but the easiest would be riding straight up Telegraph all the way into Berkeley. You can also come down this way and take it easy.
A nice alternate route would be going up Broadway, then College to University.
Once in Berkeley, you can go back down the way you came or take University all the way down to the water and catch a sunset at the Berkeley Marina.
From there the easiest way home would be straight down San Pablo, but for safety reasons, I would weave through the side streets to stay away from traffic. I would honestly ride back to Telegraph or any other street. I just don’t like riding on San Pablo.

The Mormon Temple Redwood 35th Loop
This is for those that are in shape and on a good bike. You will be doing a lot of uphill but the views and downhill will be so worth it!
The easiest way is to hop on Lincoln and just go straight up to the Mormon Temple. This will be your first stop and it will be obvious but it’s on the right and there is a parking lot you can ride into. From here you have a nice view of the Bay. If for some reason you’re getting hungry by then there is a nice little Round Table Pizza and a deli around the corner on Mountain Blvd.

I know it’s tempting to turn around and go back down Lincoln Ave but I promise if you continue up past the Temple you will find a little street on the right by the name of Butters. Upon turning you will notice a big brown hill. Pick your bike up and walk to the top of this hill. You can learn more about the great view here.

After Butters you could walk across the street and check out the stairs of Joaquin Miller Park but then you should continue up Redwood Ave. Once you get to the top of this hill it will be a lot of really awesome wind in your face, hair blowing downhill speeding from here. So be prepared! You’ll turn right on 35th and continue your way back down to MacArthur. There is one last little view if you turn right on Victor Ave and then an immediate left and up. Take a break and then continue back down 35th to wherever. If you keep going straight you will hit Fruitvale BART. 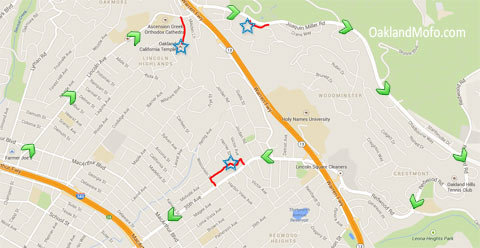 I have more I’ll be posting later so be sure to subscribe.

Most Dangerous Bike Route In Oakland?
I would say the very traveled route heading from the Lake towards Broadway/downtown Oakland on 14th St is like running a death wish gauntlet. There is absolutely no room or bike lane and Oakland drivers are careless and known for hitting and running. This is a major commute artery and if Oakland wants to be a “high tech city” then it’s going to have to get with the times and make it safer for smarter alternative commute riders. Take a look at Portland for example.
Oakland lacks bike lanes all together with the exception of a very few.