Telegraph is a little Beer Garden on Telegraph and 23rdish in Oakland. While they dub themselves a beer garden I think of them as more of a burger joint. If you were just walking by you would think it was more of en empty yard with some tables, maybe even a prison to keep people in. But a closer look would reveal cool things painted on the walls and a counter with beer on tap and amazing burgers on the grill. I think they are the best burgers in Oakland. Pictured below is the Smoke House Burger, cheese added for $1 and no lettuce or tomato. Just meat, cheese and onions. The meat patty is 50/50 ground beef and bacon. Yes, it’s half friggen bacon. Then on top of that you get sweet roasted mouth watering BBQ pulled pork. So it’s kind of like an epic Sloppy Joe bacon beef burger. If you can fathom that?
Follow OaklandMofo on Instagram. 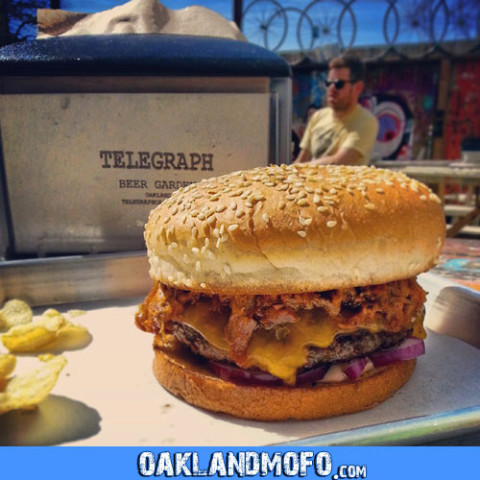 As if that weren’t awesome enough, the better burger, Too Fat To Skate is two patties and has a slab of macaroni and cheese on top of it. But it’s $17.
Summary, best burger in Oakland, 2 fat patties, one is a 50/50 half bacon, half beef and the other is full on beef explosion and instead of a slice of cheese you get a slab of mac and cheese.
You pretty much just have to go get this right now.

Another ultimate menu item would be the pulled pork sandwich with jalapeno-slaw on it at only $10. It’s delicious and pretty filling and way more affordable.
I hear the sausages are really top notch too.

But the obvious problem here is NO burger should cost $17. Highway robbery from this brand new hip beer garden(established 2012).

There is also the drama of the “takeover”. Telegraph Beer Garden happens to be where Momma Buzz Cafe used to be. The story as I read it, is that the old owner could not afford to make the unavoidable mandatory repairs to the aging building which they are required to do as the business owner with a commercial property. So they did not make the repairs and once the lease expired they tried to extend it and sell it to someone else who claimed to have the money to make the repairs. The problem here is that’s like you having your apartment, not being able to afford to keep it, extending the lease anyways and then selling that lease to someone else for profit. So while some label it as a hostile takeover and think the Momma Buzz Cafe owner was ripped off here, I think they tried, couldn’t hack it and shouldn’t have the right to sell someone elses property lease for profit when they can’t afford to maintain the business. I think the current owners of Telegraph have the right to say no and open their own business. And they did. But they are trippen with those food prices. Terrible and just because everyone else does it does not mean you should. Bad Oaklander. 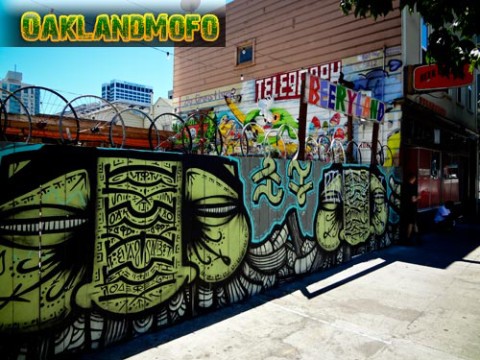