In an almost not shocking turn of events, Rudy’s Can’t Fail Cafe has sprung a surprise no warning announcement that they will be closing down for good. 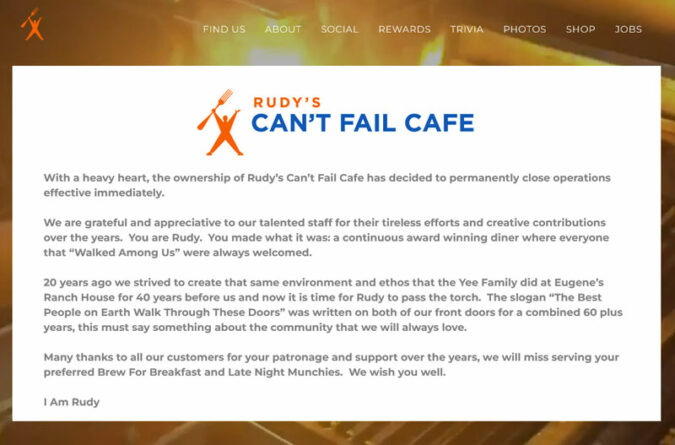 They literally posted join us for Fish and Chips this Friday and then 3 days later posted they are immediately shutting down for good.

In a normal timeline, this would be shocking, a surprise, unimaginable. But with how California and Oakland have treated their small business owners, this is expected and will eventually happen to everyone. Business owners are surely to blame as well.

The first factor to take into account is with extremely high costs of doing business and rampant crime waves in cities like Oakland, the Bay Area is just not a place to operate a business.

There are other factors in loss of customers.

It was only recently Oakland stopped forcing vaccine cards to enter such businesses and that alone was devastating to many small restaurants.

It wasn’t until June 25th only a few weeks ago that Alameda County let people remove their face masks indoors.[1] [2]
However, it is still up to the local business.

We Have Questions for Our Readers

One must remember, local governments are not the only ones to blame. These businesses played along and forced things on their employees and customers.
Did Rudy’s participate in such actions?

In 2002 Rudy’s opened its flagship location in Emeryville, CA near the border of Oakland in a small almost office park-like neighborhood near Pixar. I myself have been there a great number of times as it was a favorite location back in those days of the early to late 2000’s.

In 2011 they opened a second location on Telegraph in Uptown Oakland. I tried it, more times than I would like to think about but was just let down every time. From higher prices to less friendly staff and poorer quality food, I was let down one too many times and stopped going there back in 2013 or 2014. It just was not worth it. Not only did this location turn me away from this new Rudy’s, I never went back to the original Emeryville location because this one sucked so much.

My final straw was after a night of drinking(when food should be best) at nearby by Uptown(also now closed) or Cafe Van Kleef, going there, waiting way too long for a jerk server who seemed to favor other tables of people, I was served a not just rare hamburger(I always order medium or medium rare) but the red meat was cold in the middle! I just didn’t understand this and was treated like I should just eat it cold. I love some red meat, I do not like COLD(likely just unfrozen) meat. She ignored us from the get, took too long then brought that out and was stank facing me and my partner the whole time. Her manager then did not want to refund me but instead insist I let them take it back to cook it more. At a time I understood being white in Oakland was the new evil, but I was born there. Not a transplant gentrifier. She was the final straw in a long long time sometimes weekly Emeryville location customer.

As one would expect, this Uptown location failed and closed in 2018. To be fair the “up and coming Uptown neighborhood” is a total disaster. It is dangerous and not a place you should be trying to attract customers to.

As for Rudy’s Emeryville location and the glory days, here is a list of awards Rudy’s gathered over the early years when there was hype surrounding them.
They seem to have fallen off after 2010.