The City of Oakland currently has 8 permitted Marijuana Cannabis Dispensaries listed below which now sell legal marijuana to all California residents or out of state residents with a government ID. 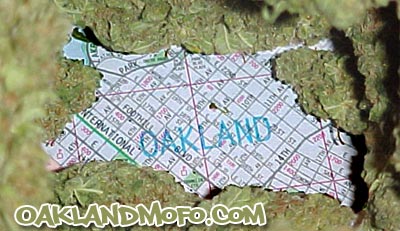 Oakland (also known as Oaksterdam) is taking a step forward while others are taking a step back. The Federal Government has raided and shut down over 200 pot clubs during the last few months but that hasn’t stopped Oaksterdam from growing. While others are shutting down Oakland has doubled the number of permitted clubs.
In fact, recently the Federal Government has encroached on Harborside and the City of Oakland is suing the U.S. Government.

Oakland has always been cutting edge in the Medical Marijuana Industry
In 2006 Oakland became home to Harborside Health Center, which is now the nation’s biggest weed dispensary with over 108,000 patients. The co-founder, Stephen DeAngelo claims to have personally taken hundreds of millions of dollars from street gangs and drug cartels via his legal tax-paying, job supplying marijuana operation. On the other hand Oakland Police claim to have lowered drug sales themselves. Either way, since drug sales and illegal incomes have been taken from the streets of Oakland, violent crime rates have gone up.
In 2007 Oaksterdamn became home to Americas first Cannabis University or “weed college”. However the feds have raided and shut the weed school down which is a sad point in the forward movement of legalizing marijuana.
In 2009 Oakland was the first US City to tax Medical Marijuana.

Oakland charges a $60,000 fee for each dispensary permit, alongside with collecting a 5 percent annual business tax. This brings in about $1 million dollars a year for Oakland and could potentially be doubled to $2 million now that there are 8 legal clubs.
Meanwhile, the state of California is bringing in about $100 million a year in taxes from the billion-dollar medical marijuana industry.

The Growing Industry market is currently flooded and oversaturated with high-grade marijuana. Meaning the clubs are turning away growers and not buying their crops. So you can still get a pound of weed a LOT cheaper than you used t be able to. This is good for the middle man black market drug dealer but bad for the growers because they are forced to produce even larger quantities of high-grade marijuana.

While all of this is great and generate a lot of income for many people such as the medical clubs, random growers, middle man drug dealers and even the Mexican Drug Cartel, there is a huge unspoken problem of how the weed is being cultivated and what toll it’s taking on the rural hillsides of Northern California.

Nestled deep in the forest and hillsides of Northern California are thousands of illegal grow operations known as trespass grows that are hosting millions of marijuana plants. These grows are very prosperous for the weed farmers and medical marijuana clubs but are extremely hazardous to the natural local environment. A lot of these outdoor illegal grow ops are actually supplying the clubs and of course black market dealers.

The illegal marijuana farmers are taking over private property, cutting up all the trees, building dams on local creeks and streams to steal the water for their grow and then dumping all of the chemicals and waste byproducts back into the streams. This kills off all of the fish and other local wildlife while adding to the California Drought. It undoes millions of dollars in endangered species rehabilitation projects and is very counterproductive to the State of California restoration projects.

The farm guards are usually armed and dangerous and even set up booby traps to keep out would-be thieves and random hikers. In many cases, the marijuana growers in North California are actually the Mexican Drug Cartels running these pot farms. The people left behind guarding the operations generally don’t speak English and are usually confused as to where they really are. Most of them are technically being held hostage with death threats to their families if they do not comply and guard the farm.

After a marijuana harvest is done they abandon the land and leave behind tons of waste, garbage, toxic pesticides, and a devastated forest. So as you can see this new California Gold Rush is causing major problems.

For more details on the illegal grow ops, farm eradication and exact numbers collected by the Sate of California check out this story. 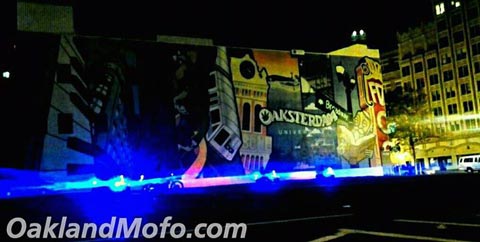 Taken during Occupy Oakland.
The above Oaksterdam Mural has been painted over by the new landlord of the building after Oaksterdam University was shut down. It’s a shame to see it go because it was a beautiful work of art.