The Oakland Art Murmur takes place every month on the first Friday. It is spread out across different art galleries in Oakland with the majority of them being near Telegraph and Grand Avenue. It is a place where you can walk from gallery to gallery and enjoy fresh exhibits, art, clothing articles and other local artist created things. You can even drink in the galleries! Wine tasting is often abundant.

Wow it’s come a long way since I started going many many years ago.
GO!
The last 5+ months have been amazing and they even shut down the entire street on Telegraph from 27th all the way down to Broadway.
You can thank the anarchist for this one. I forget the exact month but I think in August ’12 the FTP march(F*ck the Police or that night F*ck the Permits) took over Telegraph and shut it down. By next month it was an official closing of the street and just the way things were from then on out.
Art Murmur is full of live music, bands, hip hop, food trucks, art cars, art buses, poetry slams and many many vendors. I myself have even set up and sold some of my photos on the street.
Which you can buy here.

First Fridays After The Murder

As you all know during First Friday in February there was an argument, shooting and death at Art Murmur.
This is a tragedy and really put a gloomy cloud over the event. Even innocent bystanders were hit with gun fire.
However Mayor Jean Quan(pictured with me below) did not shut it down as most expected. Instead she came out, supported and made sure that Oakland Police were there to watch over the event.
The actual killing happened around 10:30pm when the event should have been over. In fact I myself wasn’t even there because I already walked over to my favorite bar Ruby Room.

I saw this coming and started leaving round 9:30 because over the last few months it got more and more ghetto. People were getting robbed while walking back to their cars just blocks away. Is there a way to stop this? Maybe patrols around the perimeter instead of just on Telegraph? It’s too bad if you have anything nice in Oakland the young black youth come out to rob people and in this case get in gun fights with each other.

Since this death the size has been scaled way back. It is now down to between Grand and 27th when it had previously expanded all the way down to Broadway. The end time is now 9pm which is fine because it used to be the same way.
All in all I am glad it is still going because this is something unique to Oakland. It is like a monthly festival larger than most you see in SF, free and full of creative artist and musicians.
*note* Since I’ve moved to Portland I’ll say there are many a month here in different districts, no crime, no robberies and more art than drunk street walking. I thought art murmur was unique to Oakland but it’s so small comparatively and way more sketch / less artistic.

In fact, Art Murmur has become such a joke that even local artist / galleries / businesses are not a big fan of it anymore and some want to shut it down themselves. Now those who profit the most are bars and liquor stores. There is even a separate movement, Saturday Art Walk which takes place in the morning without the rowdy party crowd, going back to the roots of art.

Is it true? Is it going to be the last Art Murmur?
It is possible. The City of Oakland was footing the bill and is no longer going to support the event financially.
They have forked out over $500,000 to keep the event going but have decided to leave it up to the event organizers.
It cost about $20,000 to host each one and the event itself brings in little to no income.
They do charge the food trucks a fee but that alone is not enough to keep it going.
As it stands now they only have enough to fund one more final Art Murmur.

Mayor Jean Quan and I. 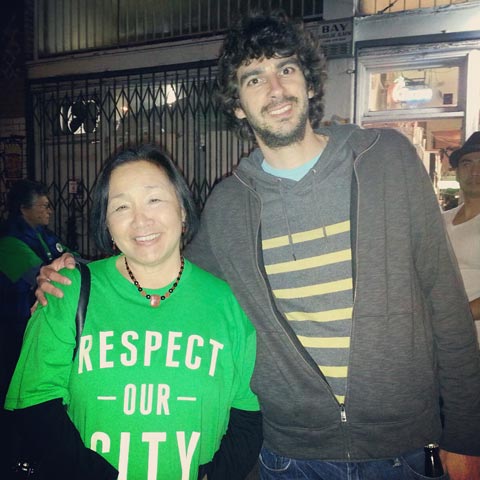 This video is live beat boxing, an electric cello(Cello Joe) and a white female raper tearing it up. These guys had a lot of MC’s on the mic rocking it and I hope to see them again out there.

Another example of what you can expect.
A live band getting down in the middle of the street.