Don’t you hate when you cook a frozen pizza and then it comes time to cut it and you just ruin the whole thing? As you slice it with your knife you rip the cheese and drag it along exposing the bare tomato sauce while mushing all of the toppings into a pile of scolding hot lava? It doesn’t have to be that way!

What is the trick to stopping this?
You cut the frozen pizza before you put it in the oven. Yes, it is as simple as that. Now cutting a frozen pizza can be a little harder than a cooked one so how do you cut it? You can’t really use a basic cheap steak knife. I use a solid kitchen knife and once you get a slight cut in, you just apply pressure on top of the knife and it cuts very easily. It is more like you are splitting it or breaking it with your weight once you get enough cut in. And it is not as hard as it sounds. It is easier and more efficient.

The other added benefit to cutting the pizza while it is still frozen, would be that you do not have to eat the whole pizza in one sitting. You now have the option to cut it in half, eat half and save the rest for later. Or cut it in 4 pieces, it’s up to you. The world is your pie. And let’s face it, the box does claim it is “4 servings”. But you and I know that is a lie. I dome the entire pizza almost every time yet I still cut it before.

When you slice it before you cook it, you are also ensuring proper cooking all the way through. Often times when you try to bake the entire pizza at once, you end up with a semi-soft or soggy center of the pie. No one likes that, not even The Grinch. But if you do like that, I highly recommend the “purrito” tactic. Pour a bunch of hot sauce on it and roll the pizza up like a burrito. Pizza burrito! With that kind of shape and wrap, you can even add all kinds of extra toppings. I used to do this with those super cheap $1 pizzas. They would never thoroughly cook without burning some part. The dough would be soggy yet the fake cheese and 3D printed pepperoni on top would burn. They just can’t cook evenly. But I guess that is why they are only a dollar. Mmmmm purrito and yes, I made that term up.

This process is going to vary depending on what brand of pizza you have because they have different radius and thicknesses that will cook faster or slower based on how hot your oven gets. But for my standard apartment oven and a normal California Pizza Kitchen frozen entree, my temperatures and cooking time are set to 380° degrees without preheating and 16 minutes cooking time. This is pretty much perfect.

Don’t I Have To Preheat?
Preheating appears to be pointless and it is not cost efficient. I never preheat anything I cook. If anything I “post heat”. I will turn the oven off leaving the door closed and letting the stove naturally cool down with the frozen item still in there catching that free cooking heat. It makes much more sense, doesn’t it? You will notice a difference on your electric bill when you stop preheating, I swear. Especially if you cook a lot. That is so many wasted minutes of heat not cooking anything. I think preheating is a conspiracy to waste resources and keep bills higher. Think about how many millions of wasted dollars that is. As for post heating– if you master the art of doing so– you will save even more. An oven is an expensive device to run. You might not think so, but it could be the highest electric drain in your home besides the dryer.

Saving Money While Cooking Pizza?
I’m sure you just realized how much money you are wasting with preheating and using an entire full-blown oven for a simple frozen pizza. It doesn’t have to be so expensive. You’re probably tacking on an extra $0.50 cents to your electric bill every time you cook a pizza! And that ends up being over $5 a month! A Whole pizza! I just made all of those numbers up and am not being serious but it is a factor. For real on the oven and preheating.

What I and many others did, was bought an efficient toaster oven. That is the answer! You save tons of money by using the toaster oven instead of the full oven when cooking things like frozen pizzas, corn dogs, hot pockets, burritos, and pretty much all frozen entrees. You may never use your oven again. You and I both know that you are not cooking a Thanksgiving Turkey.

Cutting The Pizza While Frozen 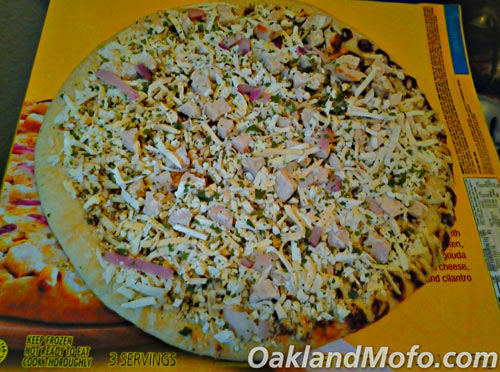 Once you remove the whole pizza from its original packaging, place it on a firm surface. I actually just use the box and keep the cardboard insert under it. There is no need to dirty a dish or counter surface while making such an extravagant dinner. As long as the counter surface is hard and flat, you can easily cut it before cooking it. 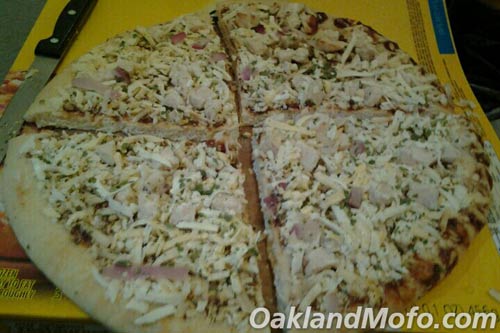 In these photos, I was using a common steak knife, which is a lot harder and why I upgraded to a sturdy kitchen knife. Here you see I cut the frozen pizza into 4 pieces. They are very even and smooth as you can see. The reason is you don’t really have to cut it. Once you get the heavy knife in there just enough, it almost breaks apart when you apply pressure or weight on the knife making for a clean slice. It is a lot easier than it sounds as long as you have the right knife. A common steak knife is a lot harder. Try it, it works.

As mentioned before, you want to place the pizza directly on the center oven rack. You do not want to use aluminum foil, a pizza pan or a baking sheet. For fast, crisp, golden brown perfectly melted cheese and cooked topping pizza, just throw it on the rack. 100. 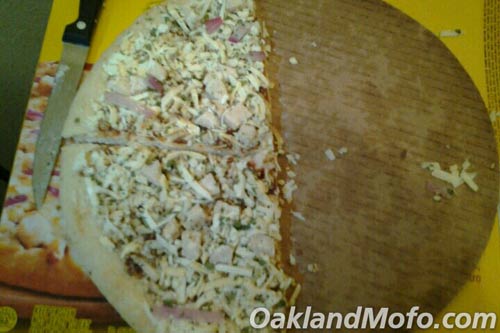 You can choose to eat one, two, three or all four slices of the pizza. You can even take the still frozen uncooked portion and put it back in the plastic, into the box and eat it later. It’s frozen and super processed so it will last quite a while. I usually eat it shortly after though because it is calling me. 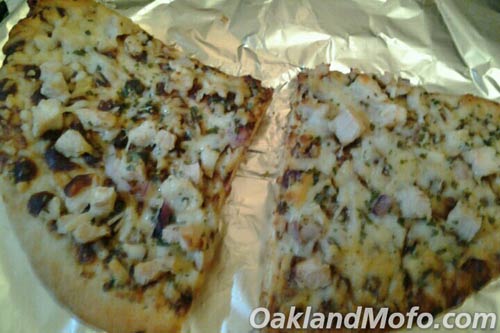 And there you have it, half a frozen pizza cooked directly on the non preheated center oven rack. It comes out perfect and the best part is, you do not have to cut it with a knife and destroy the masterpiece. At this point, the knife would just pull all of the hot melted gooey cheese and other toppings back like a blanket into a pile of superheated goodness on the side of the pizza. Effectively ruining everything. I know you know what I’m talking about and that is why you are here. 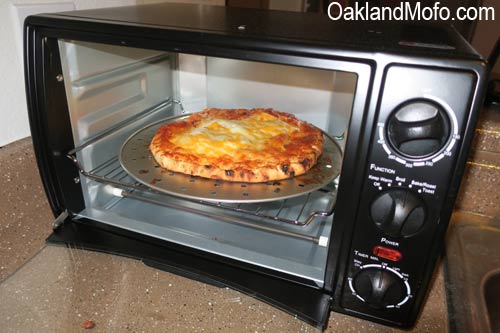 As you can see I have not mastered this art yet. I would call this a little well done, which maybe is the perfect pizza for you. I will try a few more brands and temperature ranges but it does seem to cook faster due to the close proximity of the heat emitting coils. I will get back to you next week with a better plan. And yeah, that was extra cheese that I added.

Oh, one more thing.
If you ended up on this article solely because you are looking for the best temperature to cook the pizza at or for how long, couldn’t you have just read the cooking instructions on the box? Or like trial and error? You’re old enough to know what did not work last time and try something new next time. I think.

Any questions? Tips? Dumb comments? Drop them below.
And please share this article if you enjoyed it.