I guess now that the Raiders, A’s and Warriors are moving, we don’t have to worry about this ancient stadium anymore.
Oakland Coliseum Facts:

The City of Oakland has offered and extended 10 year lease to the Oakland Athletics Baseball Team to stay in Oakland and has upgraded some features of the Oakland Coliseum Complex with promises of building a better new stadium (Coliseum City), possibly on the waterfront near Jack London Square or the Port of Oakland(same thing). But the A’s denied the new contract and are still looking to move. Bad news as the golden State Warriors announce they have a spot to build in San Francisco and the Raiders are still looking to leave.

This is a news clip on the conversion from Oakland A’s Home Games to Oakland Raiders Home Games.
[youtube]

Time lapse of the stadium conversion. 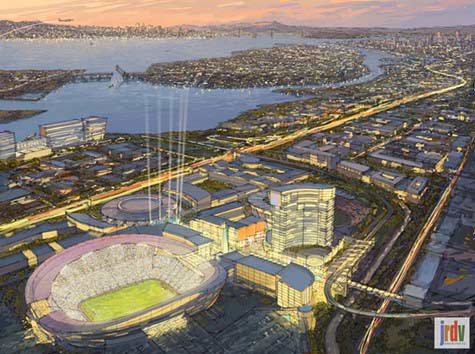 [insert]
Oakland has approved $3.5 million and the first steps towards a new “Coliseum City” project that will include new sports venues for all 3 teams. Which is good because Oakland is in trouble right now with all three teams trying to move to other cities. It will also focus largely on surrounding retail such as hotels and entertainment but will also include huge improvements and upgrades to the Oakland Airport Business Park. This in return should attract more jobs(as many as 32,000) and more retail to Oakland as well as provide new sports arenas for the Oakland A’s, Oakland Raiders and Golden State Warriors.
Golden State Warriors Moving?
In May of 2012 you may have heard that the Golden State Warriors are planning a move to San Francisco. While this is sad it will not stop Coliseum City from being built.
This is a quote direct from Oakland Mayor Jean Quan’s facebook page.
Here is the press release.

Regarding the Warriors pursuing a new venue in San Francisco: Coliseum City is a long-term development project that was never dependent on any one tenant. It was always a larger project than just one sports team. This is the largest transit-oriented development project in the state, with entertainment, sports, retail, office, hotels and a convention center, and is one of the centerpieces of Oakland’s economic renaissance. 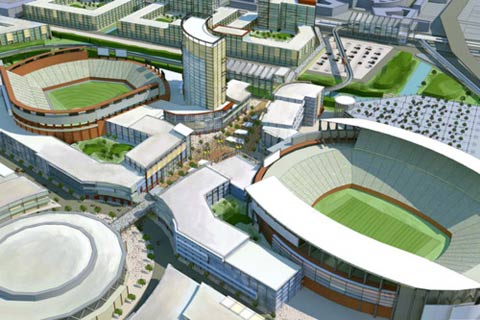 You can see it will be tied into Coliseum BART. 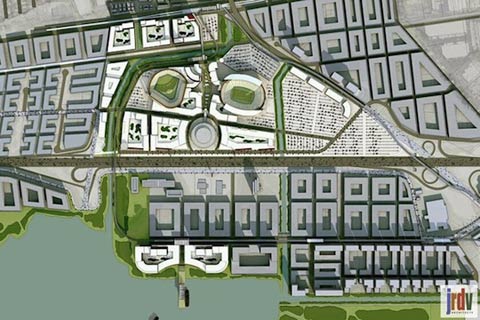 And a grand look at the proposed New Coliseum City Complex from above.

A group of local businesses and investors who have no ownership in the Oakland A’s really want them to stay.
They include but are not limited to Clorox chairman Don Knauss, T. Gary Rogers of Dreyer’s Grand Ice Cream and local developers Doug Boxer.
The proposed site is on the waterfront near Jack London Square and the Port of Oakland. Currently known as the Howard Terminal. The stadium would include the iconic Oakland Cranes. 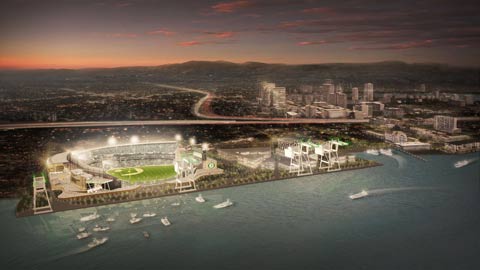 This is Manica Architectures proposal and it is great.

Overstock buys signage at Oakland Coliseum
Well you have it, on April 28th, 2011 the Oakland-Alameda County Coliseum Authority made a deal with the Utah based online retail behemoth Overstock.com today to display their name for 6 years at a rate of 7.2 million dollars. It will be dished out in increments starting with 1.2 million the first year and a 3% increase each year after that. However Overstock has the option to leave the contract early if either teams leave Oakland. Which is a high risk possibility. Currently both teams are leased to play in Oakland till 2013, at which point it is unknown because the Oakland A’s have been trying to leave for Fremont or San Jose and the Oakland Raiders have been having problems selling out since they built Mt. Davis back in 1996.

The stadium has been brandless since 2008 when McAfee did not renew their 10 year advertising contract.

Overstock plans to have signs up within 30 days and can change the name at anytime since the company is currently working on re-branding their image to O.co. In which case they say they don’t mind the nickname “The Big O” for the coliseum. And The City of Oakland is already referred to as “The O” or “The Biggity Biggity O”. Next door to the A’s Stadium you already have the “Oracle Arena” where the Golden State Warriors play. 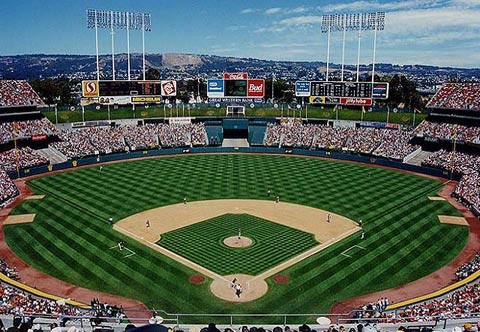 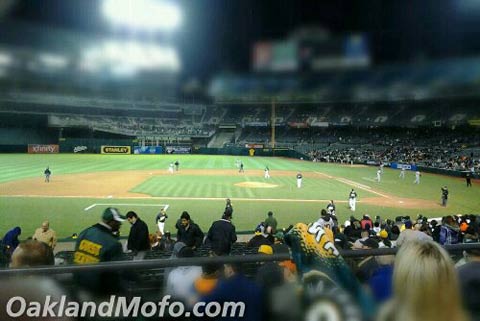 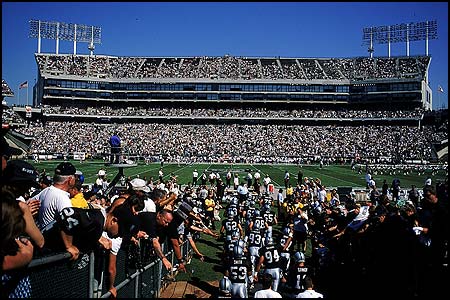 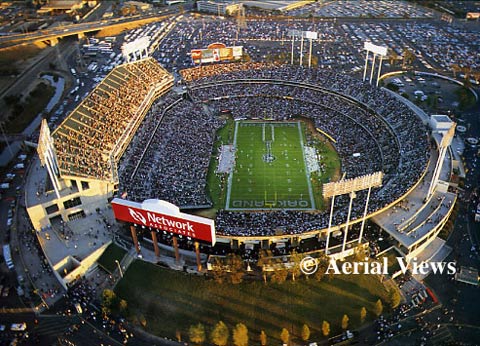 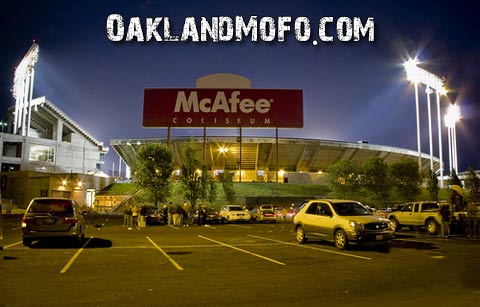 Coliseum Night time. McAfee had a 10 year contract which expired in 2008. 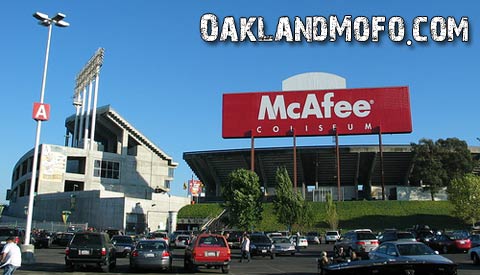 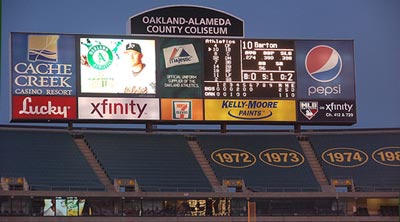 Scoreboard where the Oakland A’s get their advertising money.

Tarp on the upper deck to limit crowd thinning at Oakland Athletics games. 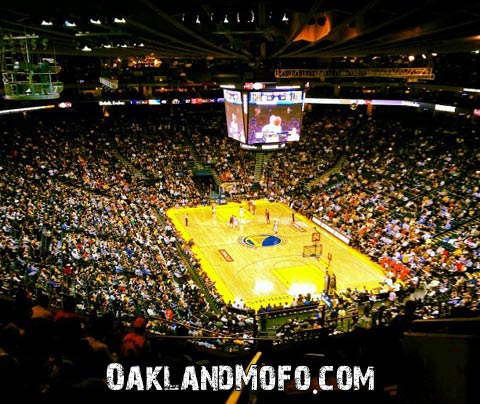 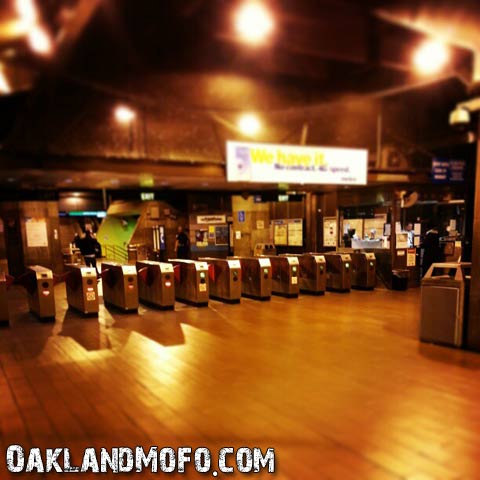 The best way to get to the game is BART! And you get off at Coliseum BART station and walk over the pass. 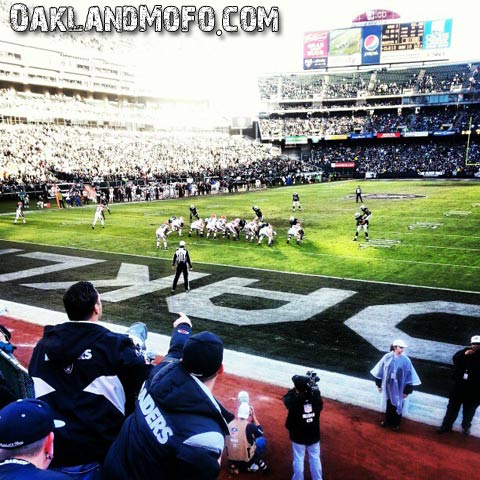 At the Raiders Game up in the end zone. 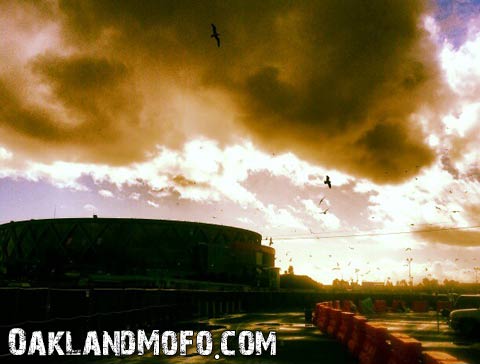 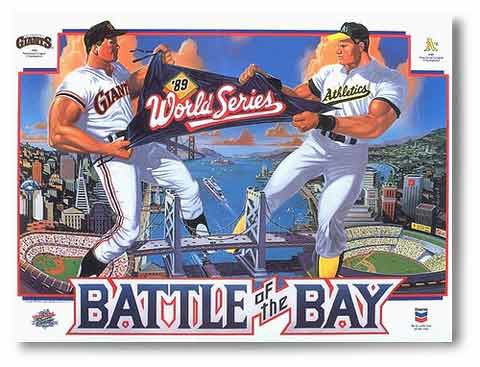 1989 World Series Battle of The Bay Poster from Chevron.