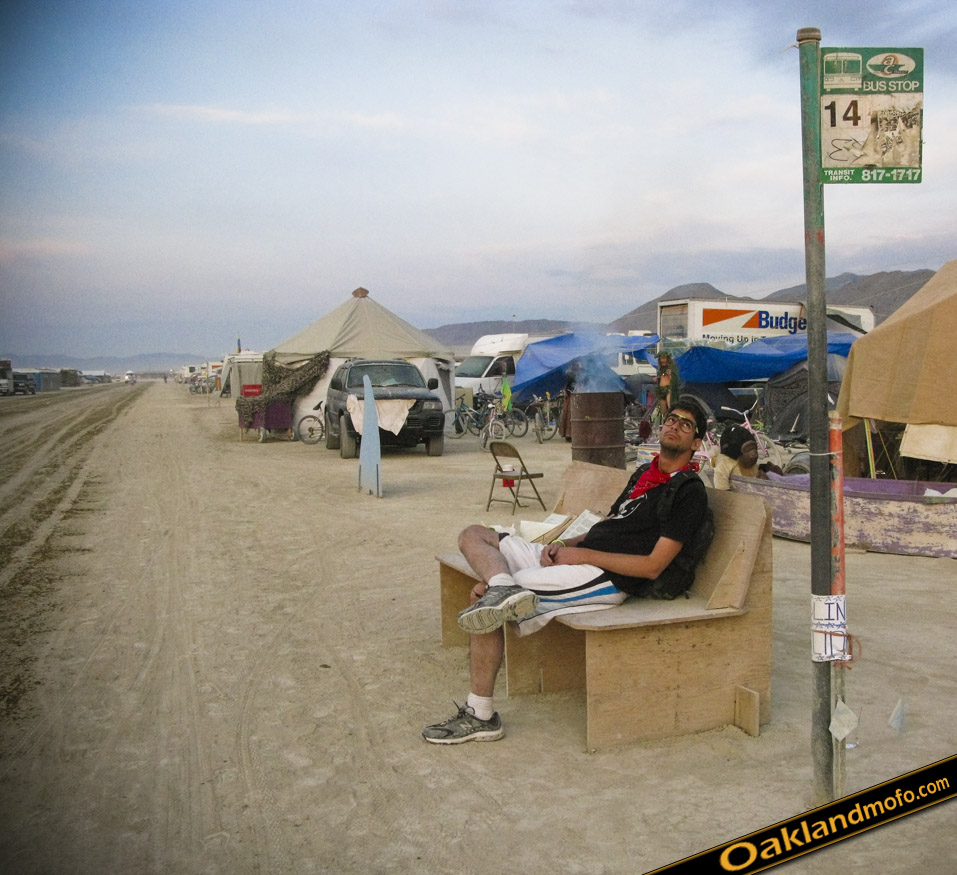 So I was walking along 5:30 coming up on F and what do I see? A AC Transit 14 bus stop!!!! I was not really surprised because I came across this last year and talked to the kids. But I was indeed happy to see it again. Turns out a car hit this stop and they found it all battered on the side of the road on the way to the Burn. I'm not sure when it's first year was but again, happy to see it.
So of course I hung out, got a picture, talked to come of the kids. On one random day my friend and I made this a "snack stop" because we had a crap load of extra snacks. We stood here handing out stuff and met all kindsa cool people. You can always tell when someone was from Oakland because they had the same surprised reaction I did last year when they came across the 14 in the desert. 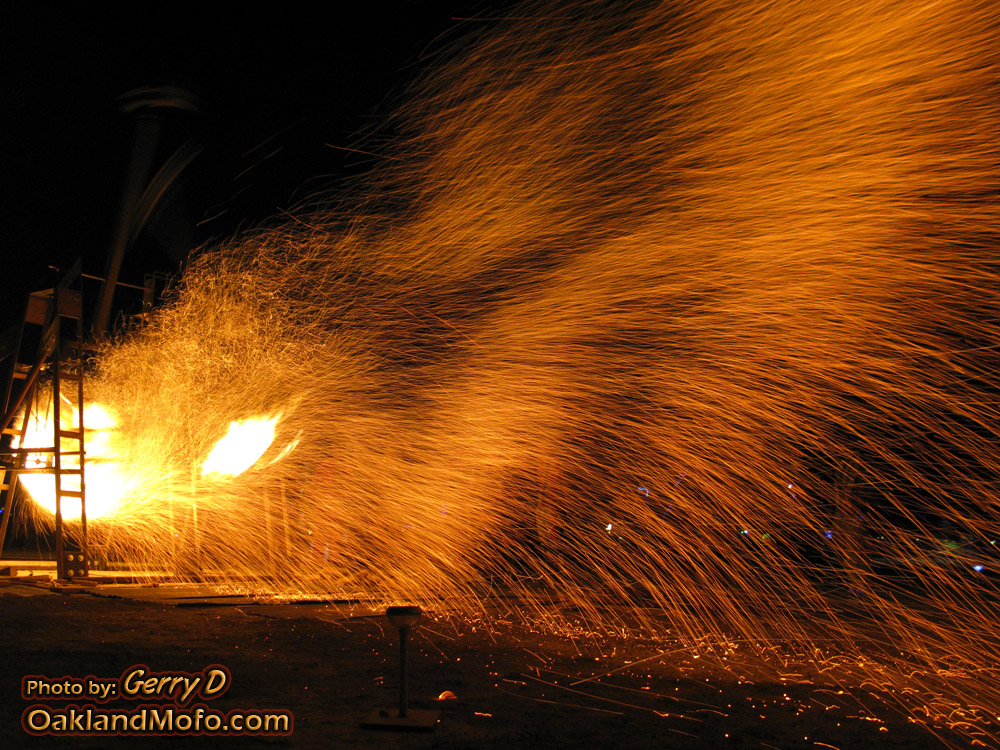 This was just cool. Again encountered it last year but did not take pictures. I sat her for a few in the stream of the sparks just in awe of the awesomeness of something so simple against the dark sky. 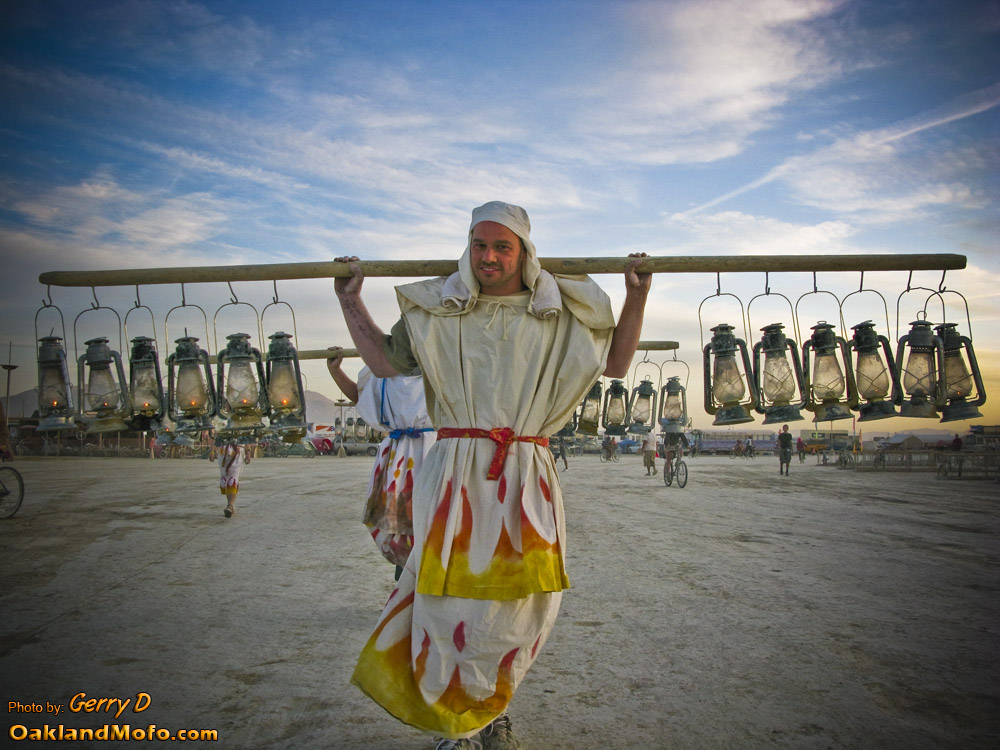 I kind alike this picture, I was chillen at the Pickle Bar or whatever next to Center Camp drinking some pickletinis when I saw the Lamp Lighters taking off for the evening so of course I had to get a close up shot. 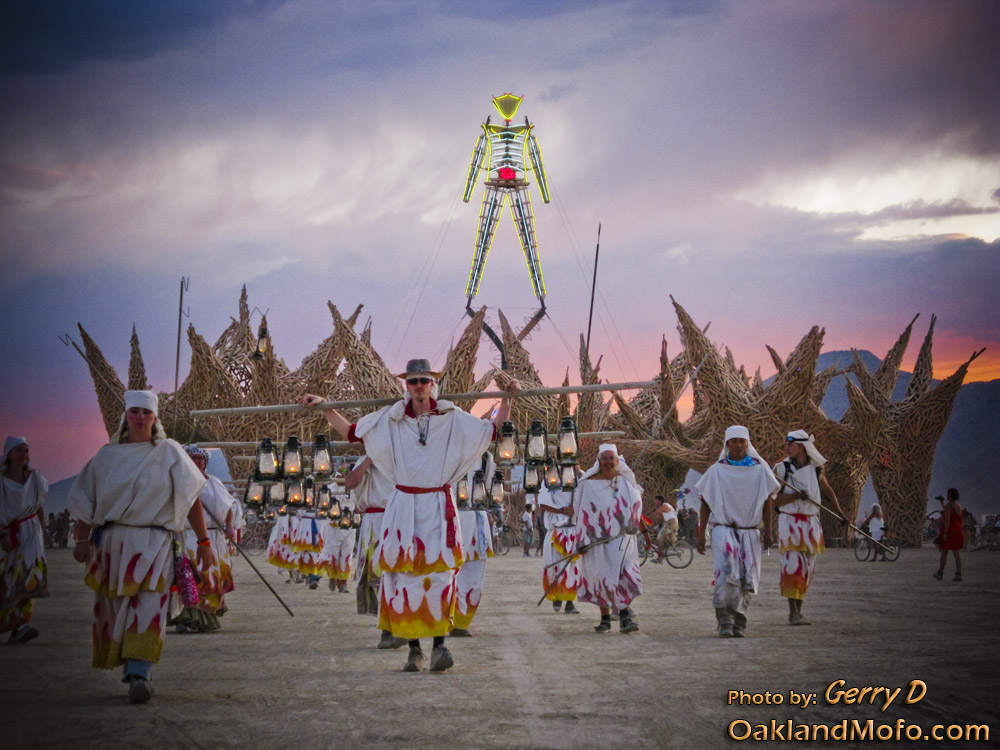 Here you have the Lamp Lighters again walking up past The Man heading towards the Temple. I wanted to get a better picture but that lady on the left acted like I was destroying something and kept yelling out of the way for the Lamp Lighters. I could have easily waited 20 more seconds and got an amazing picture but she was indeed on a traffic control trip. This was taken with a wide angle lens so they are still pretty far away at the time. 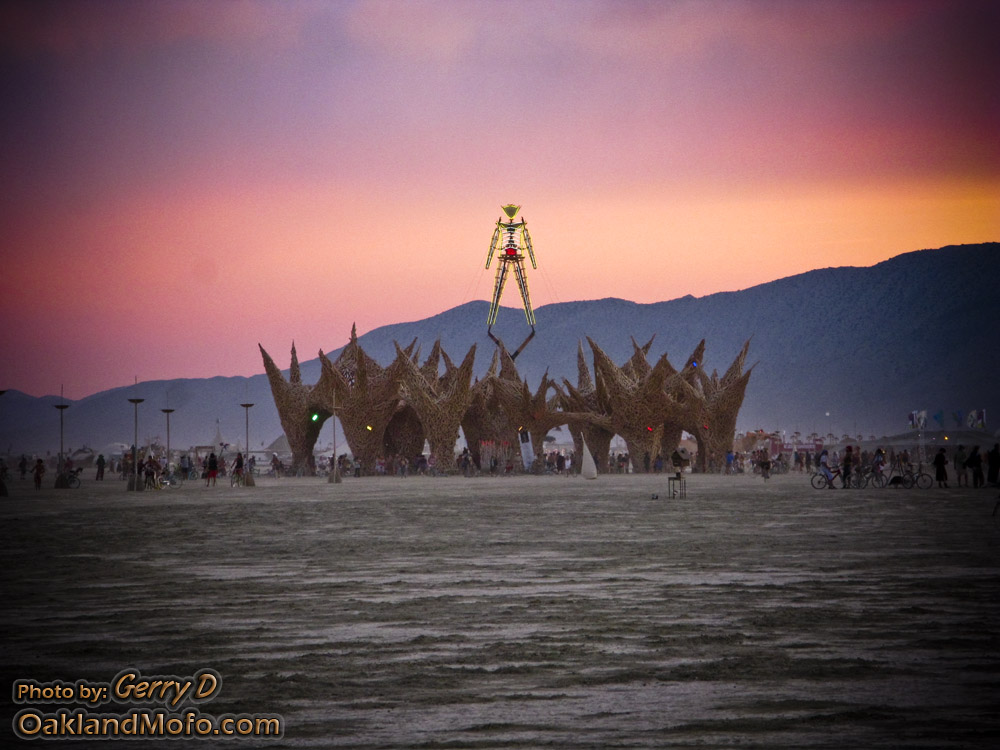 Now for a series of Burning Man photos of the Man. 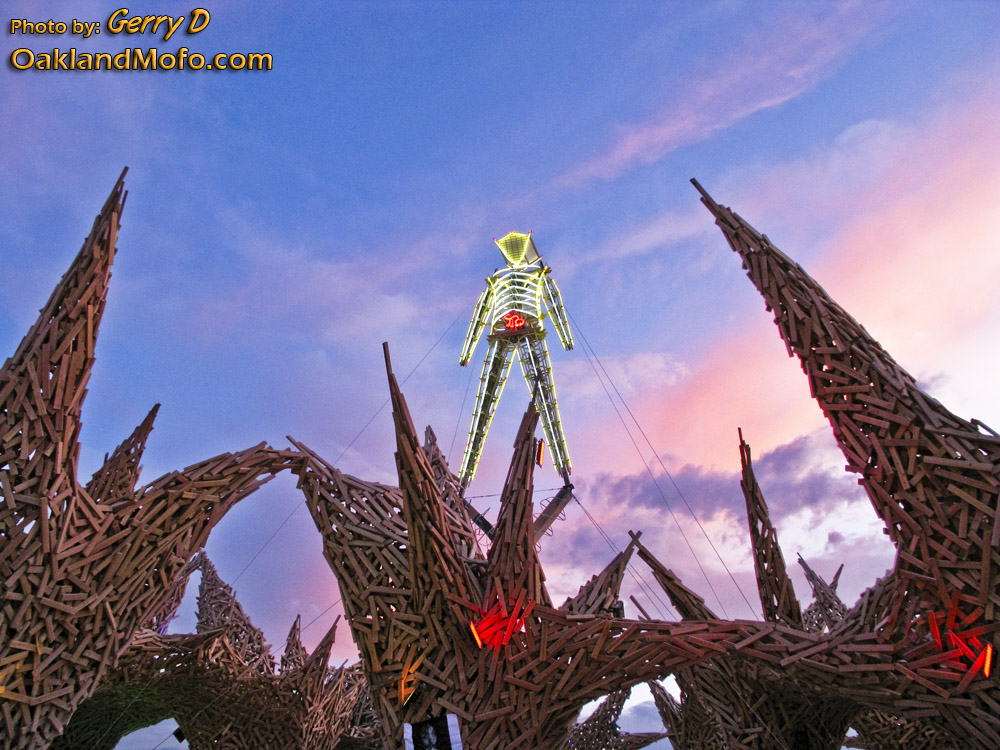 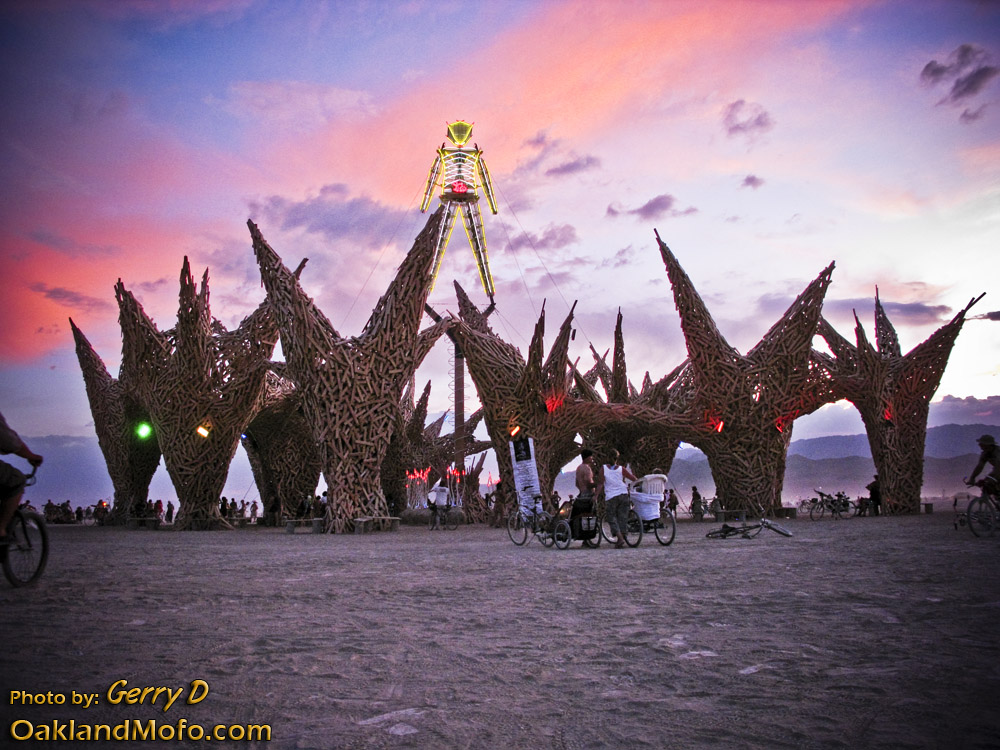 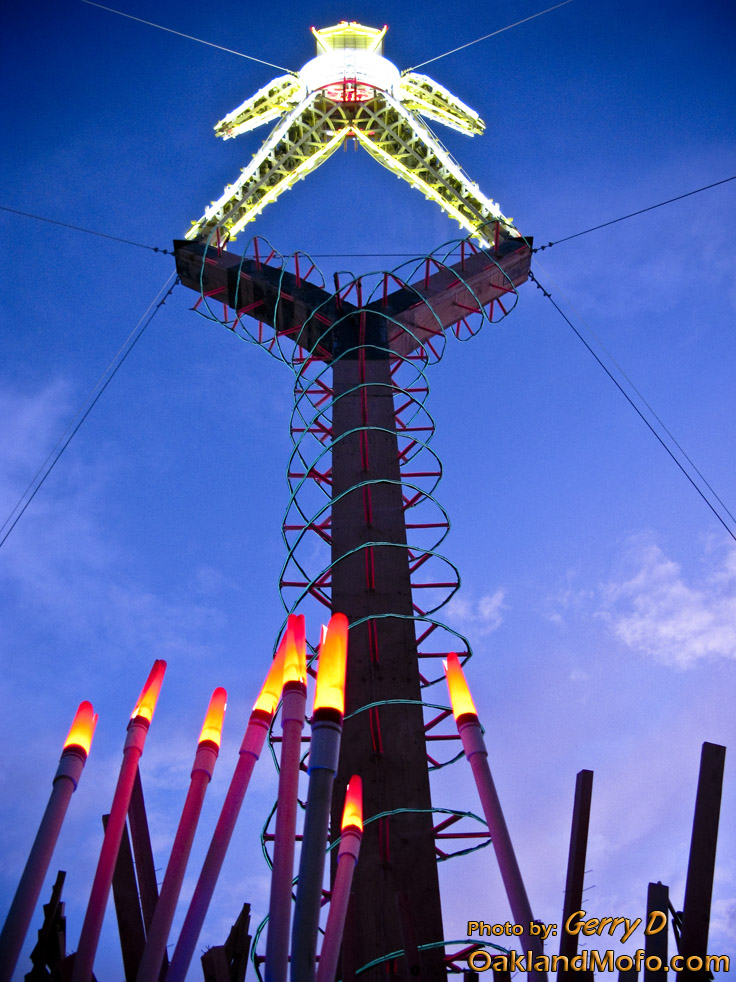 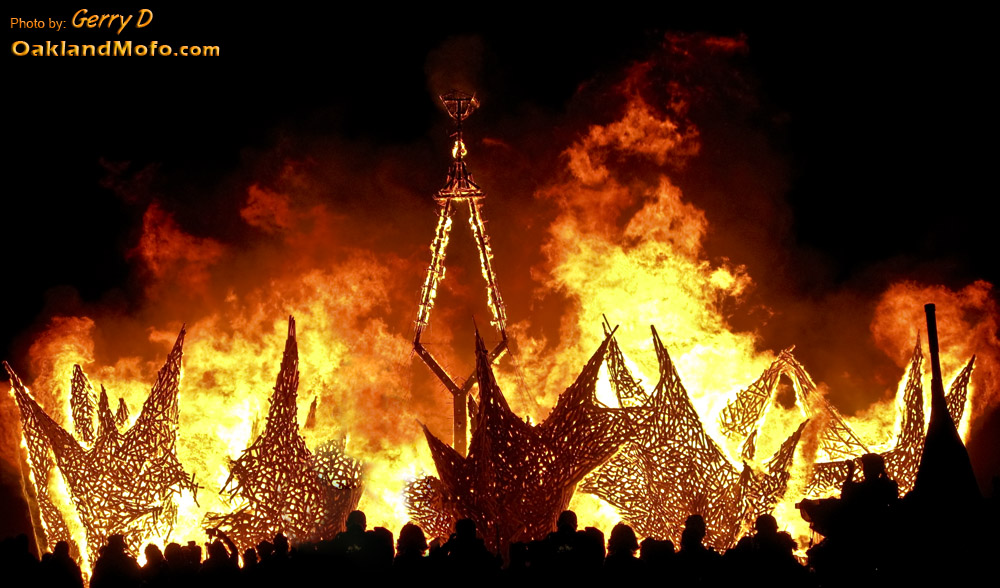 This was pretty amazing and this picture could never really show how awesome the Burn was when it was in a full inferno with raging flames. 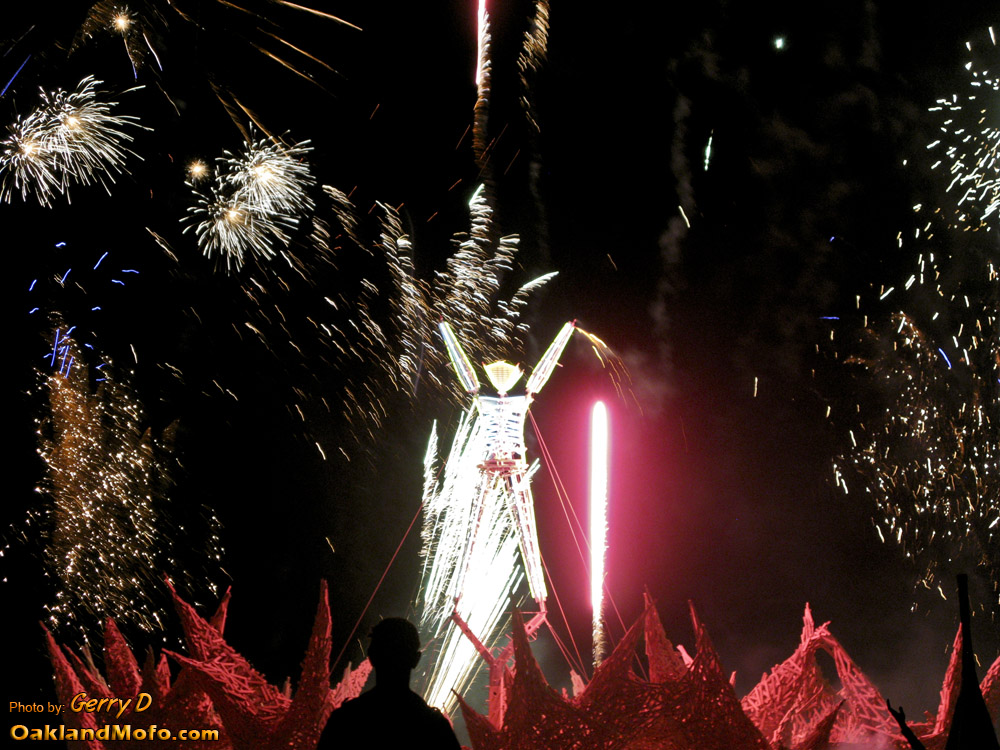 Unfortunately due to lack of tripod and timed exposure and sitting on the ground with people in front of me it was nearly impossible to get a good picture of fireworks this year. So deal. 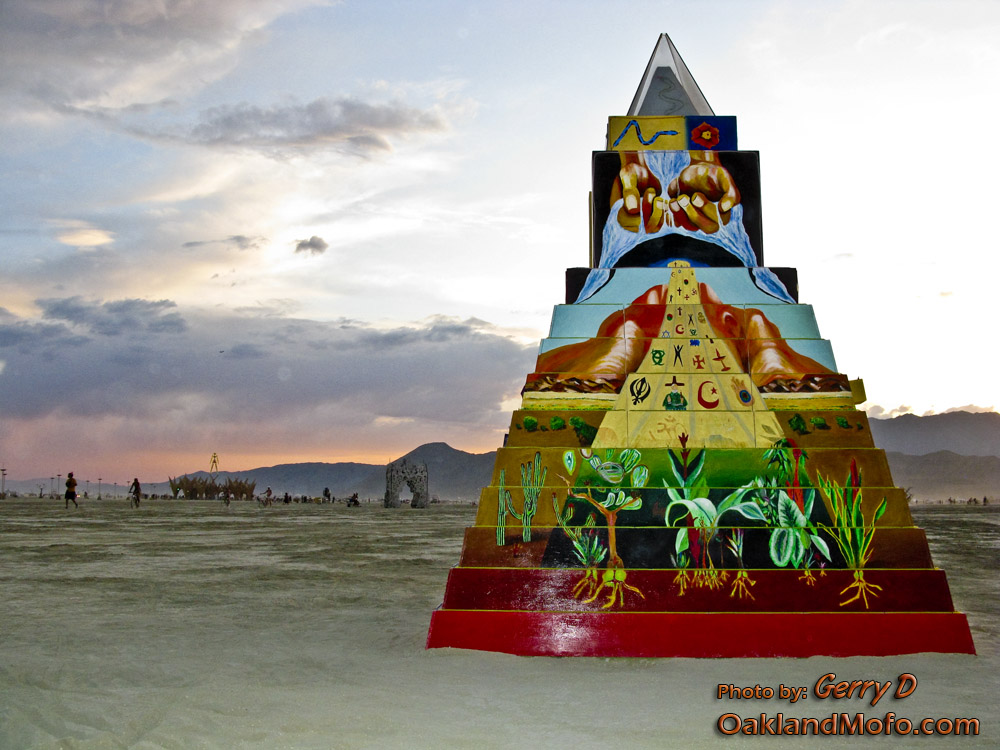 I just kinda liked the colors of this Pyramid out there on the Playa. 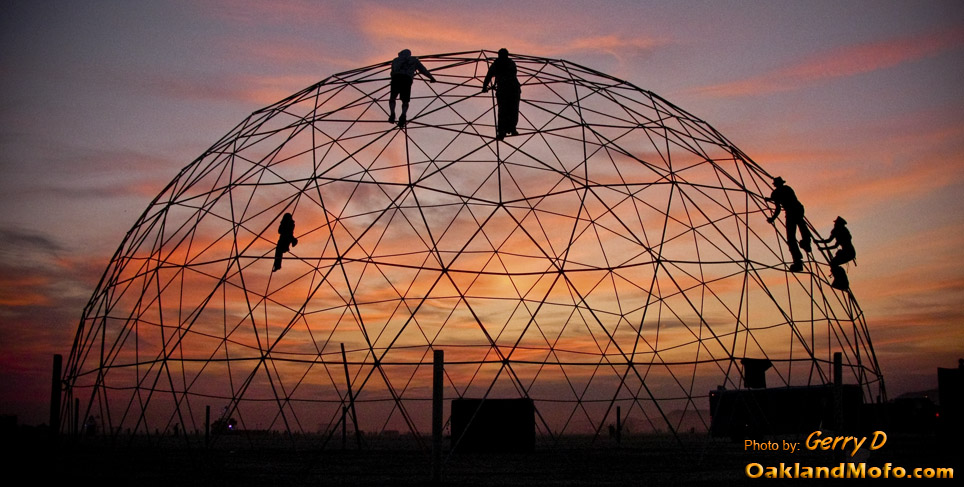 Another Sunrise on the Playa, few people out still. This thing was called the Darwin Dome which makes since. I wonder how many people fell from it? 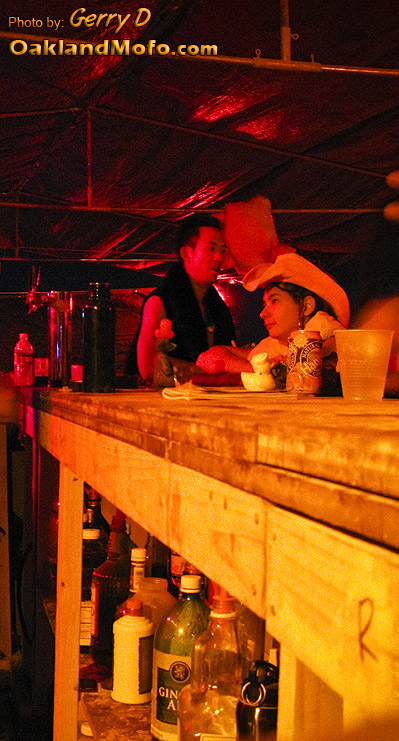 The Duck Pond. My favorite place to stop and grab a drink this year. Of course that's because Moonshine Tavern was not set up this year. However they were there chillen at Camp Fuck-It with some buddies of mine. But I spent a good amount of time in the nights stopping by the Duck Pond to chat and drink before venturing on. Met a lot of cool people here. 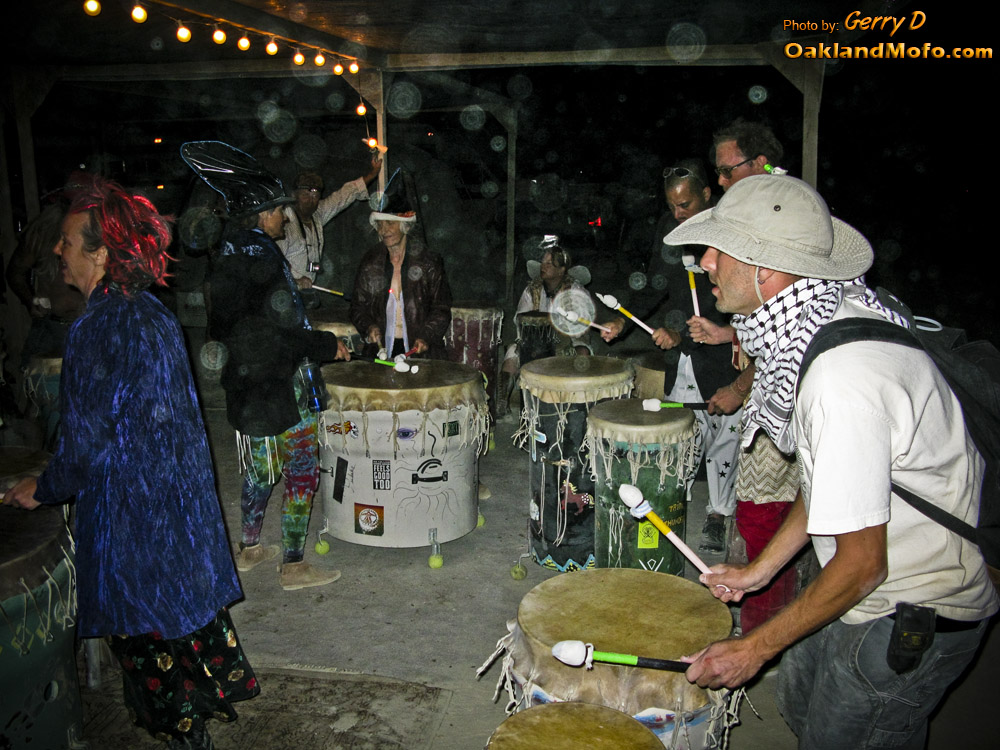 This Drum Circle was rockin! I will add videos later. But imagine like 20+ massive drums and tons of random people all in harmony with no prior practice together. Awesome. 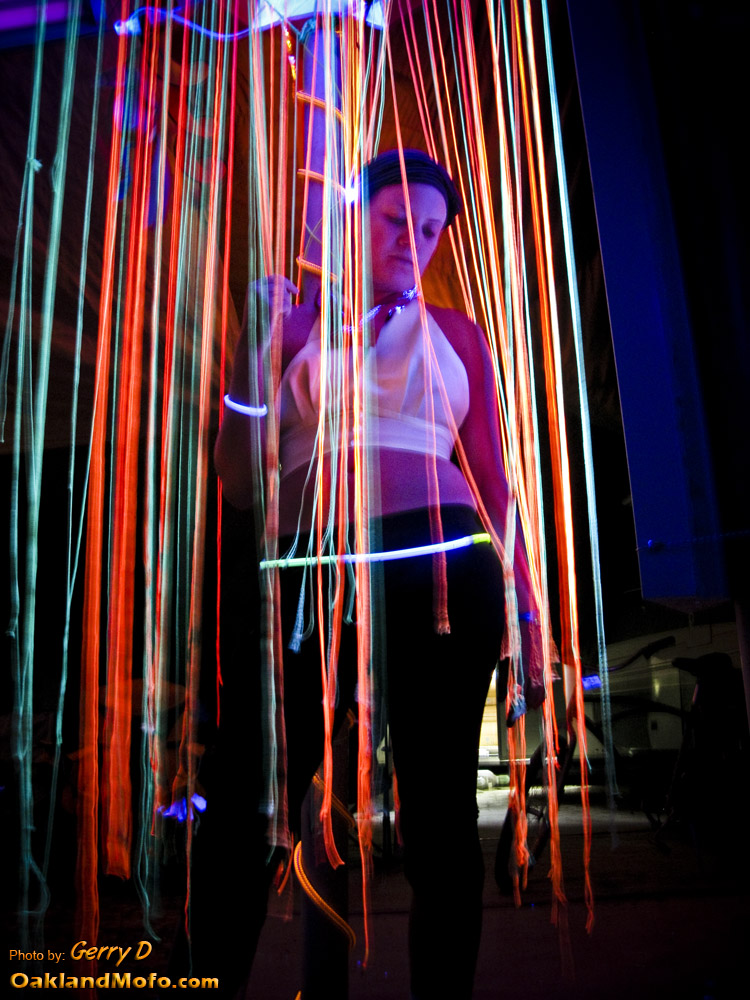 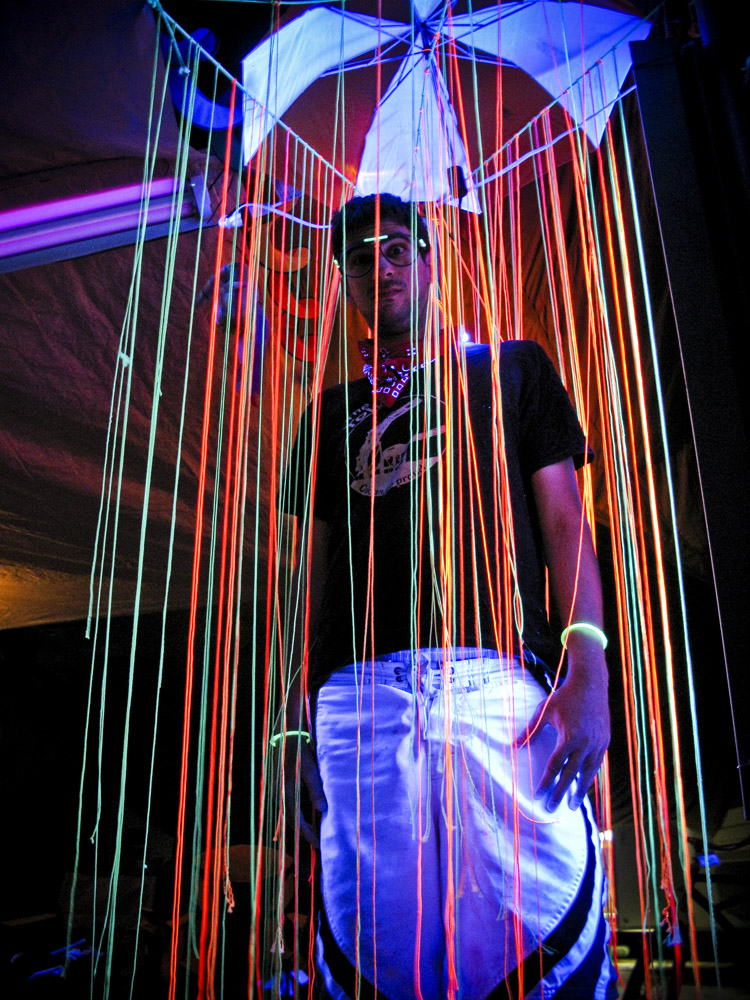 We just found this at a random camp while cutting through the blocks. 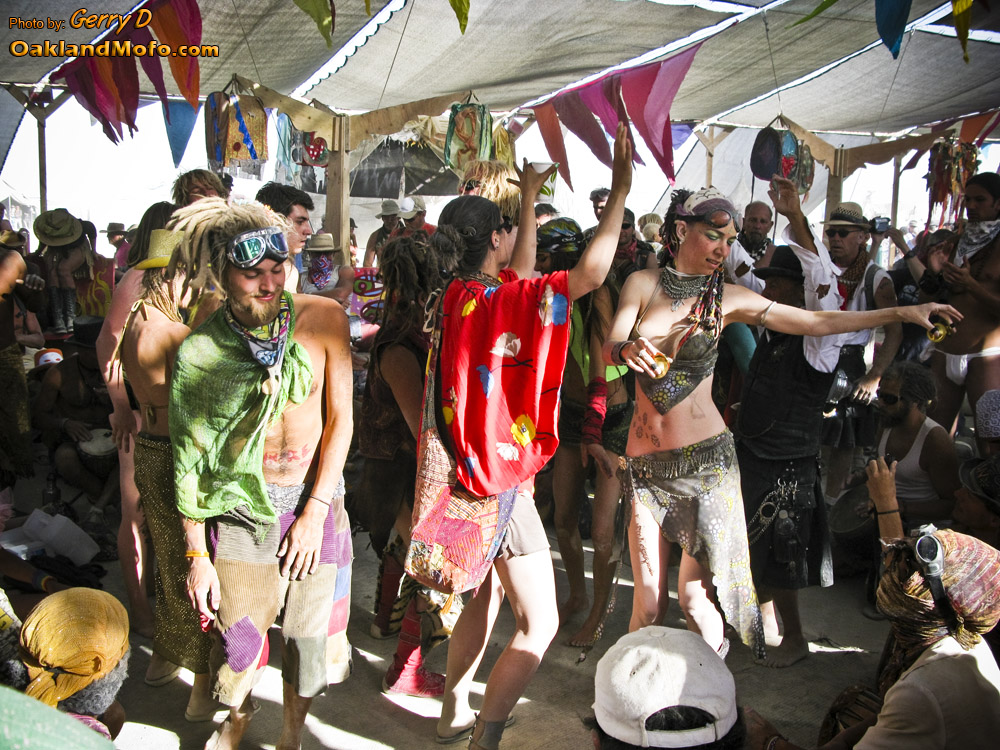 A drum circle at Center Camp, lots of dancers and fun times. It's strange, sometimes Center Camp feels like a bar on another planet or a Bazaar or something. 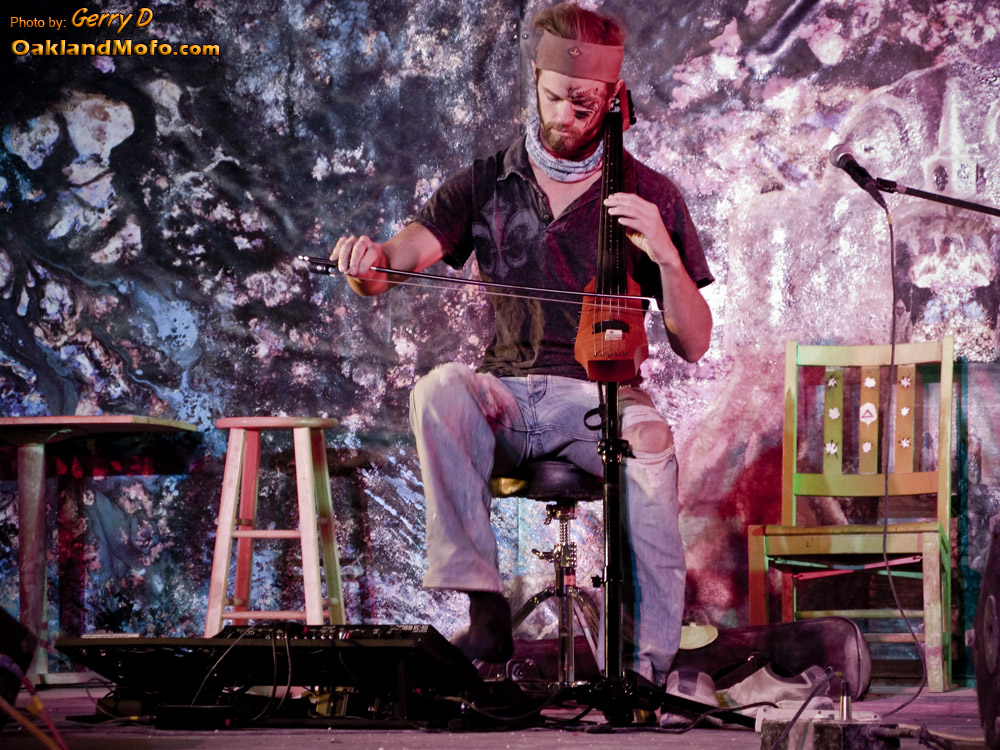 I first came across this guy one random day at Center Camp. I heard this awesome sound I was unfamiliar with and was wondering, recording or live? Almost everything here is live since it is Center Camp and all. I look around and find this guy on the ground with an Electronic Cello and a loop making machine of some sort at his feet. He is a one man army making all this awesome melody? Sure enough.
So I ask if he has a CD or anything and he points me to the flyer on the ground, Sunrise Set on Saturday. No way in hell am I gonna miss this. And i did not, it was a great way to end a long drunken night. I mean really I even fell asleep here lol. However I was sad to wake up and it was over.
I would say this was the best music I encountered at Burning Man. 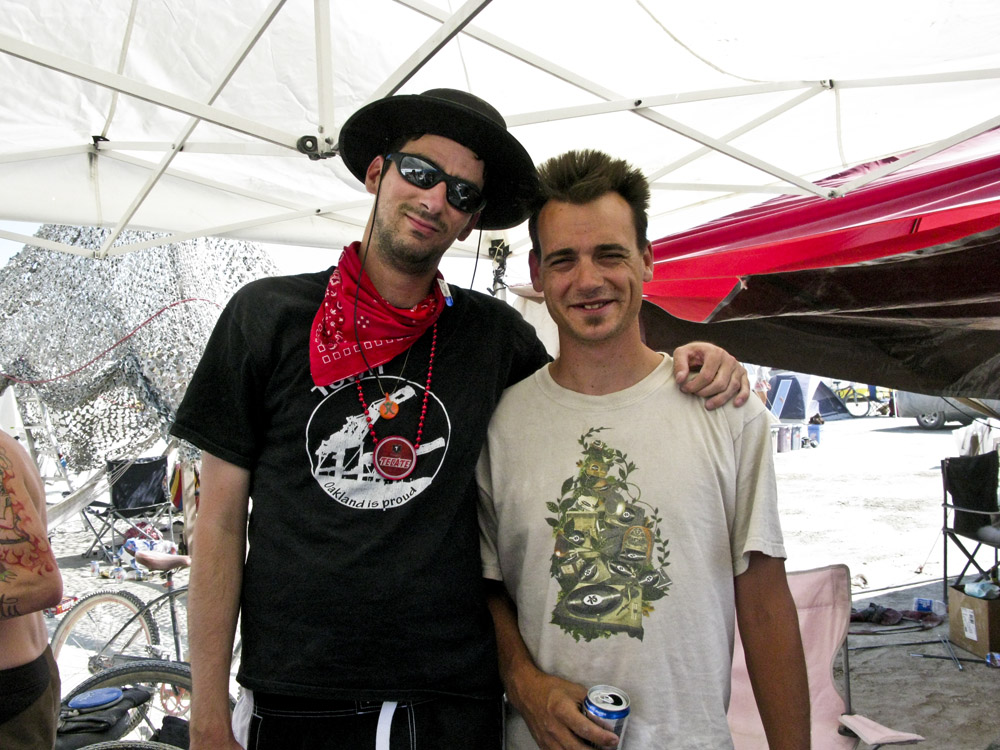 Me and my homie here chillen at camp. 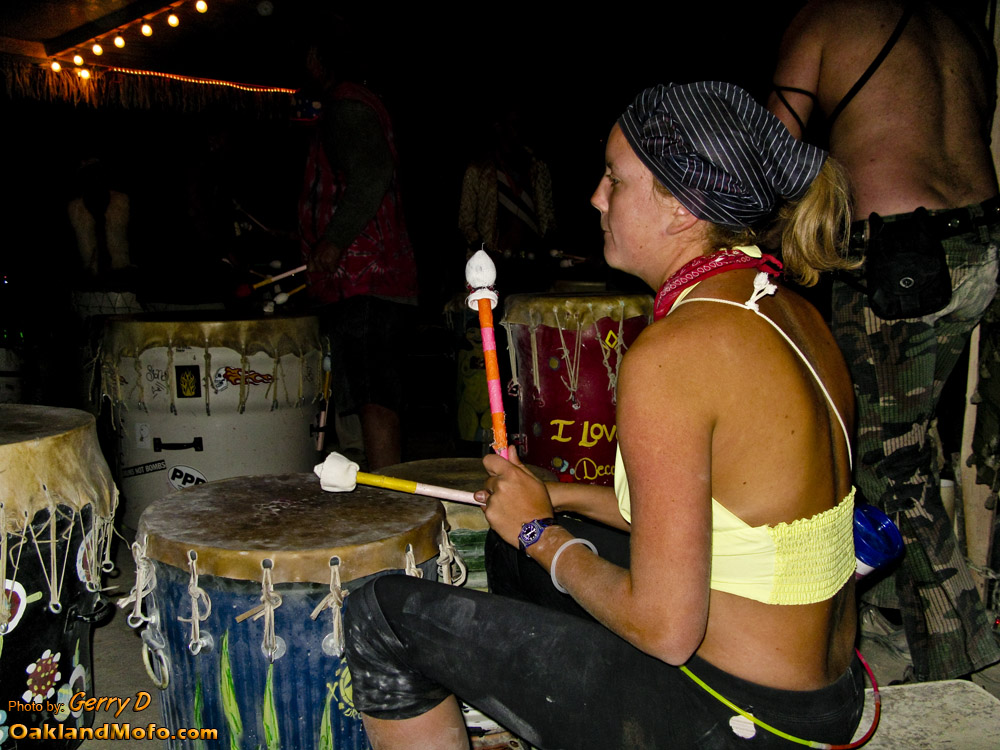 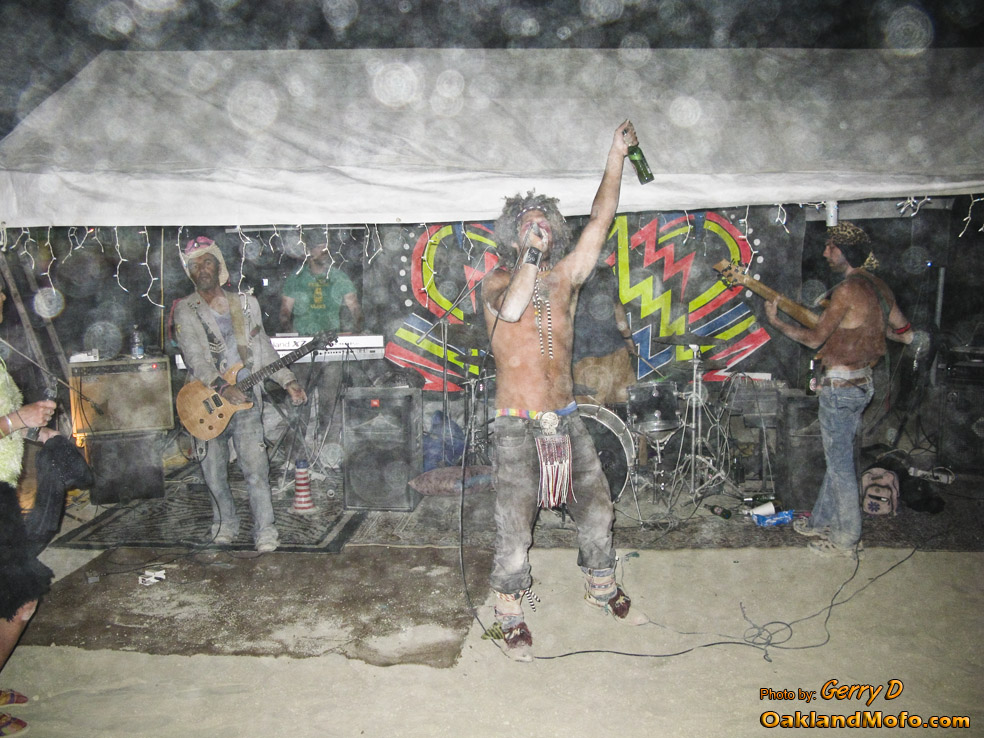 These guys were from LA, that's the only thing I can remember. And they were rockin the eff out of course. I wish I had their band name. I forgot of course. If anyone knows who they are use the contact me link on the side bar up top and send me their myspace or something. 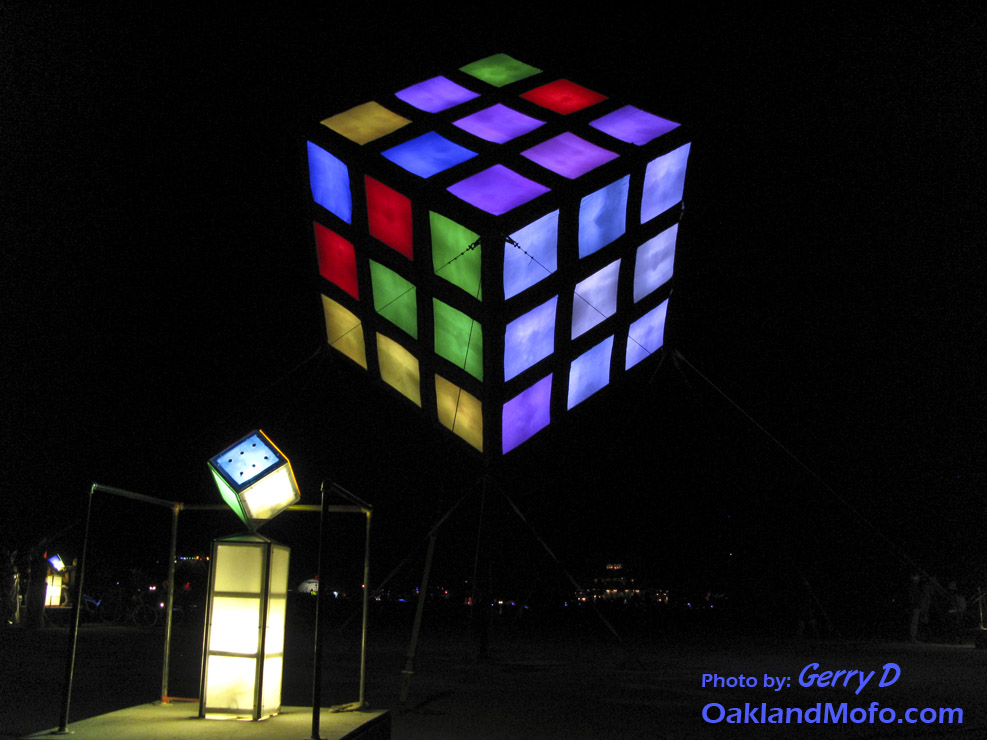 This was a pretty great idea. It was a massive Rubik's Cube that can be seen from just about anywhere on the Playa. When you get to it it has 4 podiums with controls. yes people are actually controlling this thing and working together as a team to solve it! Did anyone solve it? Someone did because I was way out there in the middle somewhere and saw this thing going nuts! It was solved and reset. From what I heard it was the camp that built it and they were using megaphones to shout coordinates back and forth to each other.

Sky Divers in Black Rock City. Common site. The night ones are pretty cool too because they somehow have fire trails. 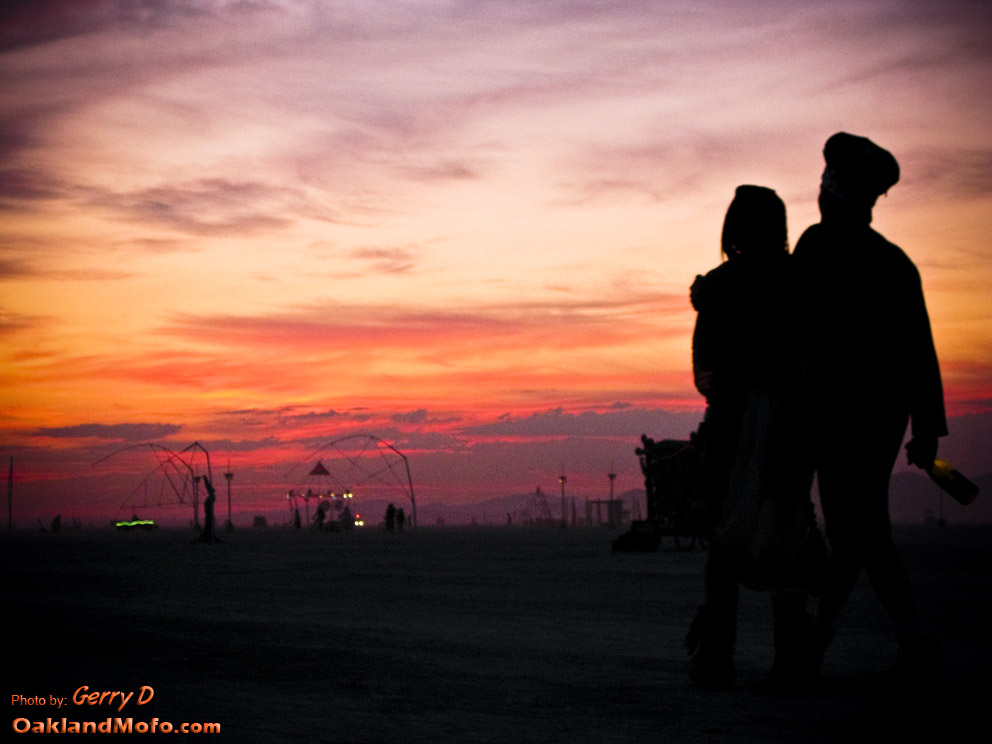 Another wonderful sunrise on the Playa. I just caught this couple with a bottle of wine taking off into the Playa. Thought it was a cool picture. 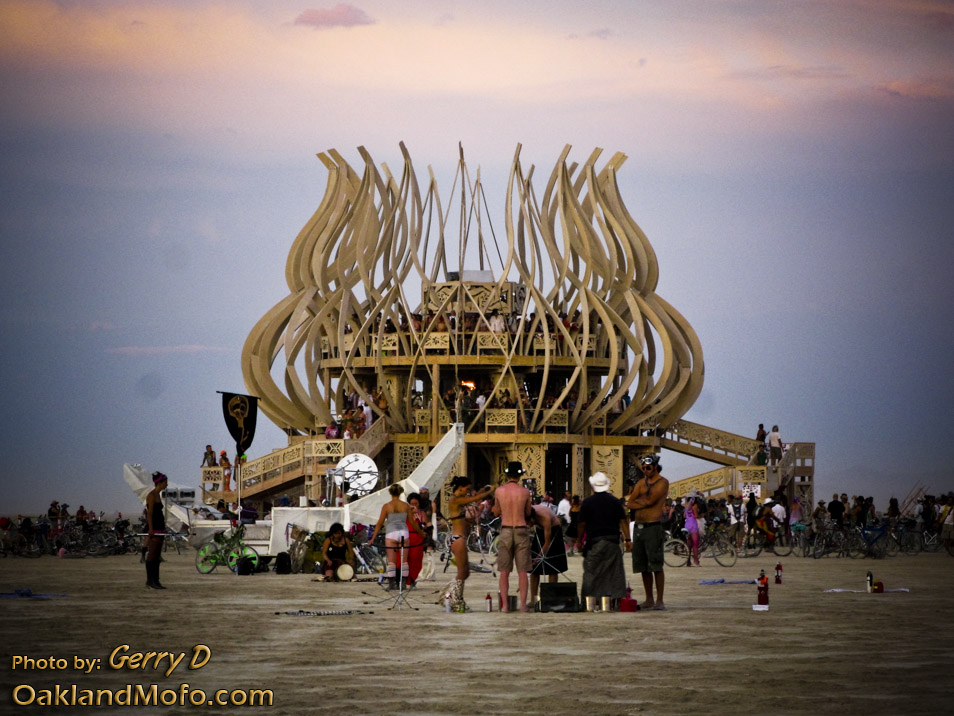 And this would be the Temple for 2009. Pretty intense. This thing shot fire man. Like fire tornados up the center. 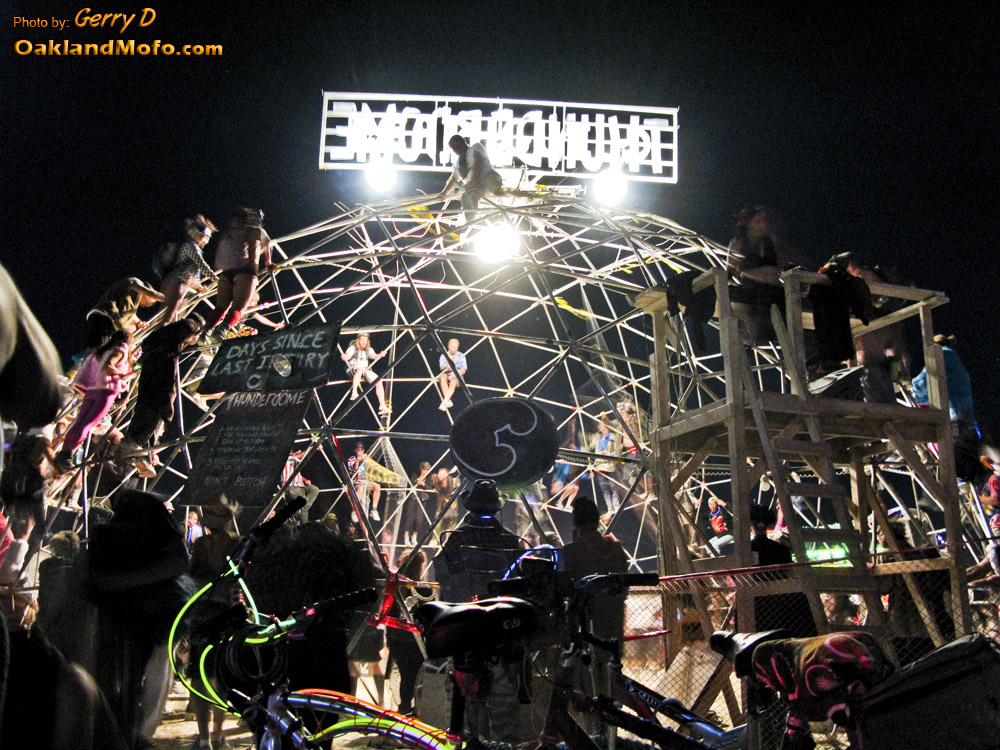 Ah the Thunder Dome brought to you by Oakland's very own Death Guild. People beat the crap out of each other in there.

Ok, so people keep asking what is the story behind the jerk Art Car.
It was Wednesday night if I recall and me and 2 friends were out on the Esplanade who knows where. This car was stopped and they were letting people on so of course we got on no problems and were welcomed by people at the door. It was fun, we hung out downstairs for some time, one of the guys even asked my friend to bar tend! They were pretty welcoming and nice. So my friend was bar tending for some time before we decided to go upstairs.
Once upstairs we were having a blast, dancing and traveling the Playa. I would say we were on this car for 45 minutes before captain save a crew jumps out from behind some curtains and tells us we have to get off. He says this is a private party and we have to get off NOW. Keep in mind we are in the middle of the Playa who knows where and he expects us to just hop off while moving.
I was like ok, private party, that's cool take us back somewhere I'm not hoping off way out here. He says no you gotta go now! They actually forced my buddy who was bar tending for a good 20 minutes to hop off while moving. I told them to go fuck themselves and no way was I jumping off with my lady friend here in no where land while it's moving.
I also pointed out to him how much room was there and how we made random friends with your so called crew only people and I don't see what the big deal is. I could only assume the girl I was talking to was one he had his interest in. Like dude as you can see I got a female right here so you don't need to worry about that.
It seems like he singled us out for no reason. Made my friend hop off while it was moving then tried to make me and her jump. I stood my ground and was ready to throw down if this guy was gonna try to force me off a moving art car in no where land.
Anyways once we got to about 9 and Esplandish I got off. It was fun till that guy decided to be a dick for no reason.

So that is the first encounter. Another night, maybe Friday me and lady friend were out by the slide or something and the car is stopped letting people on. Awesome we think, they have a bar and everything. Maybe jerk guy isn't there. So we go to get on and some super trashed drunk chick immediately snatches a glostick off my friends arm and says, THESE ARE MOOP! Like whooaaa lady, these are not MOOP they are attached to us and will remain that way. Now that your drunk ass is waving them around like you're all special they may become moop. You can barley hang onto your drink.
She says you can't get on here if you wear glo sticks as she waves her vodka and redbull or whatever all around spilling it on my friends fur coat.
She then grabs for glo sticks on my friends foot where I have to actually grab this drunk skeeze hand and push her back. You have NO right touching anyone or taking other peoples property. You are no one.
She goes you can't have these on the Playa or some random crap. To which I reply, we are walking around in the deep darkness of the Playa where a bunch of vehicles are going in every which direction, you or no one is going to take anything from me or her and tell us what we can or can't do.
Well you can't get on she says, at this point I told her I don't even want to get on your fucking car, look for your reviews online.

Yes I understand a lot of work and money went into this and I guess that gives people the right to be jerks. Not the whole crew were jerks, I met some awesome people on there and had a blast. I guess it was those few that ruined it. That guy coulda just been all whatever, you been on here for almost an hour, people like you and I'm the only one who came out of no where after sniffing some blow behind a curtain and tried to kick you off a moving vehicle, so you can stay.

Funny because last year I was getting on an Art car and the guy asked me how many girls I had with me, it was me and 2 others or else I wouldn't been let on!! The ratio on there was amazing, yes but I mean what is that crap?

Don't forget to check out my 2008 Burning Man Photos here!!!